In CF, deterioration of lung function as evaluated by spirometry was continuous and varied according to sex, pancreatic insufficiency, and severe CFTR mutations. No differences were observed between groups in terms of predominant type of bacteria, but the reduction of spirometry parameters was significant in the predominantly S. aureus and concomitant infection groups. 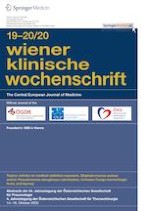 Medical radiation exposure from radiological and interventional procedures in Austria

Leprosy in a low-incidence setting