Signal management is considered an important activity in pharmacovigilance and should be performed using any available source of data, including scientific literature. The main aim of this study was to assess the role of scientific literature in both indexed and unindexed journals and compare the relevance of both in the signal management process.

The study was a retrospective analysis of safety data. For the purposes of the study, drugs for which safety signals were evaluated by European Medicine Agency (EMA) were chosen. A match analysis of data collected in the EudraVigilance (EV) database with data from bibliographic databases such as MEDLINE, Embase or EBSCO (International Pharmaceutical Abstracts, IPA and the Allied and the Complementary Medicine Database, AMED) was performed.

A total of 73 drug event associations (DEA) and 4160 individual case safety reports (ICSRs) were analyzed. About 33% of ICSRs were created based on scientific literature. A total of 1196 ICSRs were submitted to the EV database based on journals indexed in global bibliographic databases Embase (86.00%) or MEDLINE (81.96%) or EBSCO (IPA or AMED, 0.66%).

This study underlines the importance of scientific literature for the signal management process in addition to other data sources. Most literature ICSRs from this analysis were created based on scientific journals indexed in bibliographic databases; therefore, it can be concluded that a systematic review of bibliographic databases, such as Embase or MEDLINE is highly relevant for the signal management process.
Hinweise

Signal management is considered as an important activity in pharmacovigilance [1, 2]. Referring to Regulation (EU) No 520/2012 of 19 June 2012 the signal management process shall include the following activities: signal detection, signal validation, signal confirmation, signal analysis and prioritization, signal assessment, and recommendations for action [3].
Drug safety is assessed during both premarketing and postmarketing phases. Signal detection is a key step of the process, and a fundamental part of the postmarketing drug surveillance system [4]. The primary goal of this system is the timely detection of new and/or changed risks associated with an active substance or a medicinal product, for example a new adverse drug reaction (ADR) [5, 6]. A new aspect of a known risk (including known ADR) may change in severity, frequency, ADR outcome, duration, distribution (e.g. gender, age and country) and clinical nature [1].
Anzeige
Signals can arise from a wide variety of data sources. This includes all scientific information concerning the use of medicinal products and the outcome of the use, i.e. quality, non-clinical and clinical data (including pharmacovigilance and pharmacoepidemiological data). Signal detection should be performed using any available source of data, including data from the scientific literature [1].
The relevance of literature review in signal detection has been confirmed in many studies. For example, Klose et al. presented a relationship between floppy iris syndrome and tamsulin. The authors informed that during the same time period 13 cases were published in the literature, but none were spontaneously reported [5]. Such differences can be related to difficulties in identification and correct classification of some ADRs by consumers/patients. Based on the above example, it can be concluded that some safety concerns have little chance of detection based on spontaneous reports; however, it seems that healthcare professionals are more interested in publishing such reactions than reporting them spontaneously to the health authorities (HA) or marketing authorization holder (MAH) [7].
The literature is the source of individual case safety reports (ICSRs) and articles containing relevant safety information for inclusion in periodic safety update reports (PSUR) and/or emerging safety issue processes [8, 9]. Many journals are not indexed in the most popular bibliographic databases. Information published in these journals can be a source of significant information relevant for the assessment of the risk-benefit balance. Because of that according to the guideline on good pharmacovigilance practices (GVP): Module VI, the MAH is expected to perform a systematic review of widely used reference databases and monitor scientific publications in local journals in countries where the medicinal products have marketing authorization [8].
Based on best knowledge, there has been no previous research comparing the relevance of the systematic review of journals indexed in bibliographic databases and unindexed journals for the signal management process. The main aim of this study was to assess the role of scientific literature in both indexed and unindexed journals and compare the relevance of both in the signal management process.
Anzeige

The study was a retrospective analysis of publicly available data. For the purposes of the study, drugs for which safety signals were evaluated by the European Medicine Agency (EMA) between January 2016 and September 2018 were chosen. Only signals that led to product information (summary of product characteristics, SmPC and/or patient information lLeaflet, PIL) updates were analyzed. The combination of adverse event and drug was classified as a drug event association (DEA) and used for further analysis.
The relevant Pharmacovigilance Risk Assessment Committee (PRAC) recommendations on safety signals published on the EMA website (www.​ema.​europa.​eu) were used to obtain a list of relevant drug international nonproprietary names (INNs) and the Medical Dictionary for Regulatory Activities (MedDRA) terms for each DEA. Preferred terms (PTs) for all signals were matched based on MedDRA version 21.1 for the purpose of line listing reports downloading process (line listing report provides listing of ICSRs for a specific substance and specific MedDRA terms).
As the next step, line listings were downloaded from the EudraVigilance (EV) database via the www.​adrreports.​eu website. The line listings were the source of data used for the assessment of the literature ICSR created based on both indexed and unindexed journals. The reference period for line listing (start date and end date of the period for reports taken into consideration during the analysis) was defined based on the EV gateway receipt date. The start date was specified as the date of first report for DEA identified in EV. The end date of the reference period was specified as the last day of the relevant PRAC meeting. A duplicate check process was performed to exclude possible duplicates.
A total of four bibliographic databases were selected for verification of literature ICRS: Embase, MEDLINE, EBSCO. The EBSCO covers a wide variety of resources, nevertheless only International Pharmaceutical Abstracts (IPA) and the Allied and the Complementary Medicine Database (AMED) were analyzed to imitate the process of medical literature monitoring performed by the EMA.
For each literature ICRS obtained from a line listing, these databases were analyzed to assess whether the journal which published a specific literature ICRS is indexed in the relevant database. During the next step, the collected data were analyzed using descriptive analysis.

In the period studied 82 DEAs were identified. For nine DEAs, there was no possibility to download relevant data from EV due to lack of data or problems with matching the proper PTs and/or INNs relevant for download of line listing. Therefore 73 DEAs were analyzed. The analyzed DEAs belonged to 12 different groups according to the anatomical therapeutic chemical (ATC) classification system.

Impact of data from scientific literature on signal management

Impact of the analyzed bibliographic database on signal management

B. Ochyra, M. Szewczyk, and A. Przybylkowski declare that they have no competing interests.
Open Access This article is licensed under a Creative Commons Attribution 4.0 International License, which permits use, sharing, adaptation, distribution and reproduction in any medium or format, as long as you give appropriate credit to the original author(s) and the source, provide a link to the Creative Commons licence, and indicate if changes were made. The images or other third party material in this article are included in the article’s Creative Commons licence, unless indicated otherwise in a credit line to the material. If material is not included in the article’s Creative Commons licence and your intended use is not permitted by statutory regulation or exceeds the permitted use, you will need to obtain permission directly from the copyright holder. To view a copy of this licence, visit http://​creativecommons.​org/​licenses/​by/​4.​0/​. 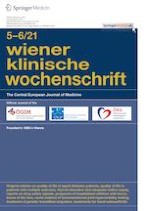