To evaluate the prognostic impact of anatomical vs. non-anatomical colectomy in colon cancer.

Based on the data of 1152 patients who underwent colorectal surgery, the 300 patients with pathologically proven stage II and III colon cancer were included. Patients were divided into two groups, depending on whether the anatomical colectomy (n = 161) or segmental non-anatomical colectomy (n = 139) was performed. The operative procedure was decided by preoperative imaging by taking into account the dominant vessels of the primary tumor. The overall survival and disease-free survival were analyzed. 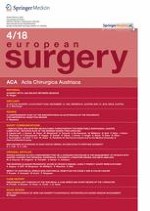 Surgery, myth, and delight between seasons

Pseudopapillary tumours of the pancreas

A life for surgery: Julius Kraft-Kinz