Ventral hernias pose a substantial challenge for surgeons. Even though minimally invasive surgery and hernia repair have evolved rapidly, there is no standardised method that has been widely accepted as standard of practice. Hybrid ventral hernia repair (HVR) is an alternative surgical approach, which has not been adopted widely to date. It combines laparoscopic mesh insertion with closure of the hernia defect. The aim of this retrospective cohort study is to evaluate short- and long-term outcomes in patients undergoing HVR.

Between October 2012 and June 2016, 56 HVRs were performed at St Mary’s Hospital, Imperial College London. The medical records of these patients were reviewed retrospectively for demographics, comorbidities, previous surgeries, operative technique, complications and recurrences over a 3-year follow-up.

HVRs were performed by four surgeons. Mean age was 48 years with a mean body mass index (BMI) of 32.8 kg/m2. 71.4% had incisional hernias and 28.6% had primary hernias. The number of hernia defects ranged from 1 to 4, with average defect size 42.9 cm2 (range 8–200 cm2). Adhesiolysis was performed in 66.1% of patients. Recurrence occurred in 2 patients (3.6%), 16.1% of patients developed postoperative seroma, 0.3% had respiratory complications, 0.3% had paralytic ileus and 0.2% had urinary retention. Only 2 patients required epidural postoperatively, both had a defect size of 150.0 cm2. There were no reoperations within 90 days. Mean length of hospital stay was 2 days (1–10 days). Over the follow-up period, 2 patients (3.6%) developed chronic pain.

The hybrid technique is safe and feasible, and has important benefits including low rates of seroma formation, chronic pain and hernia recurrence. Future investigations may include randomised controlled trials to evaluate the benefits of VHR, with careful assessment of patient-reported outcome measures including quality of life and postoperative pain.
Begleitmaterial
The video highlights the main steps of the surgical approach. The abdominal cavity was entered laparoscopically utilising an optical entry technique 12mm port, which was inserted in the left upper quadrant at Palmer’s point. Two further laparoscopic ports were inserted under vision. First, all hernia defects were identified laparoscopically, with adhesiolysis in this case. This was followed by reduction of the hernia sac content into the abdominal cavity and the sac content was freed of adhesions. Subsequently, Conversion to an open approach was then made over the hernia defect using the previous incision. The sac was then excised and hernia edges were cleared. Extracorporeal trans-facial closure of the hernia defect was performed. Subsequently returning to laparoscopy to allow mesh insertion.
The video highlights the surgical approach of visiport entry, subsequent post placements and the extent of adehesiolysis with hernia reduction laparoscopically. The next step is converting to open to allow sac excision and closure of facial layers. Finally retiring to laparoscopy for mesh placement to the anterior abdominal wall utilising double crown configuration technique.
Hinweise

The online version of this article contains a video. The article and the video are online available (https://​doi.​org/​10.​1007/​s10353-020-00671-y). The video can be found in the article back matter as “Electronic Supplementary Material”.

Ventral hernias, whether primary or incisional or recurrent, are common, and often require surgical repair. Incisional hernias occur in approximately 2–20% of abdominal incisions, with postoperative wound infection being a significant risk factor [1]. Approximately 20 million hernias are repaired every year around the world and over 100,000 in the UK, which carries a significant financial burden and morbidity cost [2‐4].
The traditional approach to repair of abdominal wall hernias has been open, with laparoscopic repair first introduced by LeBlanc in 1993 [5]. However, there is an on-going debate regarding the optimal management of ventral hernias, whether primary or recurrent. Currently, the surgical techniques employed for repair of primary and recurrent hernia are similar. Gold standard repair aims at reinforcing the hernial defect, with mesh placement posterior to the fascia. Application of the principles of Pascal’s law is crucial to the biomechanics of mesh placement and hernia repair. Anatomical closure will cause the intra-abdominal pressure to be transmitted equally in all directions, which focuses the pressure on hernia edges. In the case of onlay mesh repair, the intra-abdominal pressure forces will act to push the mesh outwards. On the other hand, with intraperitoneal mesh the intra-abdominal pressure forces compress the mesh against the anterior abdominal wall, thus acting in favour of the repair [6].
Anzeige
Most laparoscopic ventral hernia repairs use the technique of placing an intraperitoneal onlay mesh. This leads to bridging of the hernia defect following reduction of the hernia contents, but leaves the hernia sac in situ. Laparoscopic repair is thought to have the benefit of reducing postoperative pain and wound infection, and to be associated with shorter hospital stay in comparison to open hernia repair. However, this is not supported by the RCT by Eker et al. [7] showing no significant difference in recurrence rate or postoperative pain and a higher complication rate for the laparoscopic technique. Similarly, Liang et al. [8] showed that although the laparoscopic technique reduced the risk of wound complications, there was no significant effect on seroma and recurrence.
Bridging of the hernial defect commonly leaves an unsightly swelling at the hernia site, referred to as tissue eventration, which is retained preperitoneal fat or hernia sac that extends beyond the boundaries of the anterior abdominal wall fascia. By re-approximating the fascia, the dead space that contained the hernia sac is reduced. Minimising dead space potentially decreases the likelihood of seroma formation. With the fascial gap closed, there is minimal space for mesh or tissue to protrude beyond the anterior fascial plane, which decreases the likelihood of eventration. Eventration can be associated with decreased patient satisfaction following hernia repair, as it can lead to pain and perceived recurrence by patient [9, 10].
At our institution, surgeons have been preforming a hybrid repair combining both an open and a laparoscopic approach. This allows i) exposure of the hernia defect and complete reduction, ii) excision of the sac and iii) closure of the abdominal wall and intraperitoneal mesh reinforcement. We hypothesize that we can achieve the benefits of defect closure with large intraperitoneal mesh while decreasing seroma formation and maintaining low rates of recurrence and postoperative pain.

This study was a retrospective cohort study of patients who underwent HVR at a single institution between October 2012 and June 2016. IRB approval and written consent were not required as all data are fully anonymised.
Anzeige
Information was collected on baseline characteristics such as age, gender, body mass index, American Society of Anaesthesiologists classification, and the number and size of hernia defects. The operative details included were operative technique, operative time, extent of adhesions, and perioperative complications and their management. Data on the length of in-hospital stay as well as 30-day morbidity and mortality were collected retrospectively.
Only elective operations were included in the study. Primary outcome parameters were recurrence after a median follow-up of 4 years. Secondary outcomes were chronic pain requiring treatment, intraoperative visceral injury, seroma/haematoma formation, reoperation, readmission, infection, prolonged wound healing and general complications.
All patients underwent a clinical follow-up at 3–6 months to assess for recurrence and long-term complications.

The surgical approach was standardised for all included patients. All patients were operated on in the supine position under general endotracheal anaesthesia and received preoperative antibiotics 30 minutes prior to incision. The abdominal cavity was entered laparoscopically using an optical entry technique 12-mm port, which was inserted in the left upper quadrant at Palmer’s point. Two further laparoscopic ports were inserted under vision (5-mm ports); the position of these two ports depended on the location of the hernia (Fig. 1).
×
First, all hernia defects were identified laparoscopically, with adhesiolysis carried out in some cases. Thereafter, the hernia sac content was reduced into the abdominal cavity and the sac content was freed of adhesions. Upon reduction of all hernial contents into the abdominal cavity, pneumoperitoneum was reduced to 4 mmHg to allow careful and accurate measurement of defect size.
Subsequently, the open approach whereby an incision is made over the hernia defect, utilising the previous scar. The incision made is large enough to allow adequate dissection of the hernia sac and exposure of the fascial borders. The sac is then excised and hernia edges are cleared. Extracorporeal transfacial closure of the hernia defect was performed using either loop PDS or interrupted Ethibond (Fig. 1).
This was then followed by a return to laparoscopy, where the closure was re-assessed. At that time, the mesh was appropriately sized and prepared for insertion with 2/0 Prolene to allow the mesh to be lifted up with a parachute technique to ensure that the collagen side is against the abdominal cavity.
The mesh was handled minimally extracorporeally to reduce the risk of mesh infection. The mesh was secured on the anterior abdominal wall using a double-crown configuration technique with multiple 5‑mm titanium spiral tacks (Protack; Covidien, MA) or SecureStrap (Ethicon Securestrap™) placement along it borders every 2 to 3 cm. Abdominal insufflation pressure was reduced prior to mesh securing to abdominal wall. At the end of the operation, trocars were withdrawn under vision and pneumoperitoneum was abolished (Fig. 2).
×
Anzeige
A video showing surgical technique steps is provided in the electronic supplementary material.

Fifty-six patients underwent HVR with surgery performed by four surgeons. The mean age was 48 years with a mean BMI of 32.8 kg/m2. 71.4% had incisional hernias and 28.6% had primary hernias. The number of hernia defects ranged from 1 to 4, with an average defect size of 42.9 cm2. Adhesiolysis was performed in 66.1% of patients. A serosal tear occurred in one case which required intraoperative laparoscopic suturing with no further complication (Table 1).
Table 1
Characteristics of patients undergoing repair of ventral hybrid hernia
Two patients (3.6%) developed chronic pain postoperatively and 2 patients developed recurrence over a median 4‑year follow-up period. Both recurrences occurred in patients who had had Physiomeshes inserted (Table 2).
Table 2
Table highlighting the primary outcome of recurrence and demographics of the cases with recurrence
Postoperative complications: Clavien–Dindo grades 1: 19.7%, grade 2: 5.4%, grades 3, 4 and 5: none. 16.1% patients developed postoperative seroma, 0.3% had respiratory complications, 0.3% had paralytic ileus and 0.2% had urinary retention. The readmission rate was 1.8% and this was due to postoperative haematoma at day 10. This was managed conservatively and the patient discharged within 1 day. The two cases of chronic pain had Protack used and one had combination of Protack and secure strap (Table 3). These patients did not demonstrate postoperative complications and re-admission; however, both required postoperative intravenous patient-controlled analgesia.
Table 3
Distribution of postoperative outcomes in patients undergoing repair of ventral hybrid hernia
The mean length of hospital stay was 2 days (1–10 days), with 51.7% of patients having a length of stay of 1 day only. The patient who stayed for 10 days had a defect size of ≥150 cm2 and developed postoperative type II respiratory failure (Table 3). 94% of patients were followed up by clinical assessment.
There was no mortality in our cohort. Table 4 highlights the postoperative analgesia used, showing that the majority of patients were manged with oral analgesia, facilitating early discharge. All patients had low-dose spinal analgesia with diamorphine as standard of care during surgery. Only 2 patients required epidural postoperatively; these patients had larger defects size of 165 and 150 cm2.
Table 4
Table highlighting the postoperative analgesia used after hybrid repair

S. Jamel, S.M. Hakky, K. Tukanova, S. Huf, S. Markar and S. Purkayastha declare that they have no competing interests.
Open Access This article is licensed under a Creative Commons Attribution 4.0 International License, which permits use, sharing, adaptation, distribution and reproduction in any medium or format, as long as you give appropriate credit to the original author(s) and the source, provide a link to the Creative Commons licence, and indicate if changes were made. The images or other third party material in this article are included in the article’s Creative Commons licence, unless indicated otherwise in a credit line to the material. If material is not included in the article’s Creative Commons licence and your intended use is not permitted by statutory regulation or exceeds the permitted use, you will need to obtain permission directly from the copyright holder. To view a copy of this licence, visit http://​creativecommons.​org/​licenses/​by/​4.​0/​. 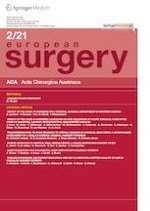 Impact of the COVID-19 pandemic lockdown on the utilization of acute surgical care in the State of Salzburg, Austria: retrospective, multicenter analysis