Purpose To analyze the amount of correlation between the intended ablation depth (IAD), as given by the ablation depth readout of the MEL 80 Excimer Laser and the clinically observed ablation depth (OAD), as measured by noncontact optical low-coherence reflecto-metry-pachymetry (OLCR-pachymetry) after Laser in situ keratomileusis (LASIK) and which pre- or perioperative factors would determine the relative amount of the preset laser ablation depth.

Retrospective, non-comparative, interventional study including 234 spherical or spherocylindrical Caucasian myopic eyes. Only eyes with a pre- and postoperative cylinder < 1.0 diopters and a postoperative re-fractive spherical equivalent (mean refractive spherical equivalent (MRSE)) within ± 0.5 diopters of plano with a minimum of 2 months follow-up were included to reduce unknown bias.

The most important factor explaining the variance of DIR seems to be IAD (16 %), OZ (4.4 %), CT (2.1 %), and FT (2.2 %). Overall, 24.7 % of variance may be explained with these four variables of the best-subset analysis in a general regression model. Die Reliabilität der angezeigten Laserablations Tiefe bei der Planung refraktiv-Hornhautchirurgischer Eingriffe 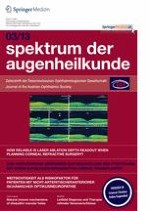