Febrile neutropenia (FN) is a common side effect of chemotherapy that frequently necessitates hospitalization and healthcare resource utilization (HCRU), but is poorly studied in Eastern European countries. We investigated HCRU and granulocyte colony-stimulating factor (G-CSF) use in patients hospitalized for FN in Bulgaria, Czech Republic, and Slovakia.

This was a multicenter retrospective cohort study. Eligible patients were ≥18 years old, had received chemotherapy for solid tumors or hematological malignancies of any stage, and had been hospitalized for FN. The primary objective was to evaluate FN-related HCRU; secondary objectives included the description of chemotherapy treatment patterns and G‑CSF use. Data were analyzed by participating country.

Data of 156 patients from Bulgaria and 79 patients each from the Czech Republic and Slovakia were analyzed. The most frequent solid tumors were breast (n = 28) and testicular cancer (n = 13), and the most common hematological malignancies were non-Hodgkin B‑cell lymphoma (n = 51) and acute myeloid leukemia (n = 35). In general, G‑CSF was used to treat FN rather than as prophylaxis. Most patients had a single FN episode, predominantly in cycle 1. The mean duration of FN-related hospitalization was 7–9 days, with longer stays in patients with hematological malignancies. 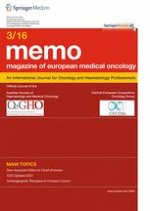 Focus on multiple myeloma at ASH 2015

A welcome statement from the associate Editor-in-Chief