Giant cell myocarditis and granulomatous myocarditis are rare diseases, leading to severe heart symptoms like tachyarrhythmia or atrial fibrillation with frequently fatal outcome. Typically, diagnosis is confirmed at necropsy or in explanted hearts, as the majority of cases remain clinically unrecognized.

Explanted heart specimens of 355 heart transplant recipients receiving cardiac transplantation between January 1994 and December 2011 were examined. Unexpected granulomatous myocarditis was found in the explanted hearts of three patients and giant cell myocarditis in four patients. We investigated preoperative and postoperative course and gross and histopathological findings of these two different disorders, which were thought to be the same disease for a long time.

Preoperatively, both groups suffered from mild to severe symptoms of heart failure. Gross findings of resected heart specimens showed right and left ventricular hypertrophy. Histological examination revealed a left ventricular endomyocardial fibrosis and inflammation infiltrates including giant cells with the presence or absence of granulomas. All patients with granulomatous myocarditis are alive. Three patients suffering from giant cell myocarditis showed a complicated postoperative clinical course, one heart transplant recipient developed Guillain–Barré syndrome due to cytomegalovirus reactivation 6 months after heart transplantation, another patient died due to cerebral edema shortly after transplantation, and another one died because of myocardial and cerebral infarction after tricuspid valve replacement.

In consideration of the limitation of this study that a small number of patients were included, our results suggest that patients suffering from granulomatous myocarditis are older at heart transplantation and have a more favorable outcome compared with heart transplant recipients with giant cell myocarditis.
Anzeige
Vorheriger Artikel Effects of different intra-abdominal pressure values on different organs: what should be the ideal pressure?
Nächster Artikel Comparison between simultaneous resection and staged resection of synchronous colorectal cancer with resectable liver metastases: a meta-analysis 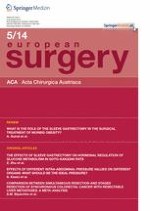 What is the role of the sleeve gastrectomy in the surgical treatment of morbid obesity?

Effects of different intra-abdominal pressure values on different organs: what should be the ideal pressure?

Surgery today: How to keep the golden mean within our academy?