Genetic analysis of choroidal melanoma is frequently used to estimate the risk of metastatic spread of the tumor. Obtaining a biopsy for genetic analysis, however, can be difficult and sometimes unsuccessful. We evaluated the feasibility and accuracy of genetic testing using array comparative genomic hybridization (CGH) after radiotherapy, from tumor samples obtained by endoresection or after secondary enucleation.

Array CGH was successfully performed in all 15 cases. Time from radiotherapy to obtaining the sample for cytogenetic testing was between 14 and 879 days. Results of post-radiotherapy genetic analysis did not differ from pre-radiotherapy findings. 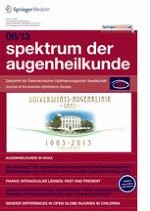 Phakic intraocular lenses: past and present