We analyzed a cohort of patients who had surgery for colon cancer at our center between 01/1990 and 12/2015. Clinical, pathological, perioperative, and long-term survival data were retrieved from a prospective database and gender-related differences were calculated for the overall cohort as well as for open and laparoscopic sub-cohorts.

In total, 1786 patients, 909 (50.9%) male, 877 (49.1%) female, were included. Women had clinical symptoms more often, but histopathologic and resection parameters as well as tumor location did not differ significantly between groups. The majority (n = 1609, 90.1%) underwent resection with anastomosis (male vs. female n.s.). Laparoscopic surgery was performed in 640 (35.8%, male vs. female n.s.). Men had a higher rate of anastomotic leakage (n = 50 [5.5%] vs. n = 30 [3.7%], p = 0.034). Other complications also occurred significantly more often in males. Analysis of open and laparoscopic surgery showed significant differences in complication rates only within the open group. The 5‑ and 10-year overall survival rates did not differ significantly. 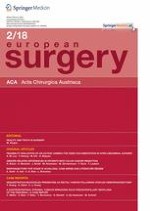