A prospectively maintained database was used to identify all patients who underwent HALS for colorectal cancer at the National Cancer Institute from April 2006 to November 1 2014. Data are presented as frequency (proportion) or median (interquartile range).

Hand-assisted laparoscopic colorectal resection preserves nearly all the benefits of laparoscopic colectomy reported in the literature. With experience, it is associated with improved clinical outcomes. 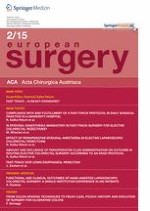 Light frames the shadow: surgical teaching and education in 2015

Tamoxifen for the prevention of postoperative intra-abdominal adhesions