The objective of this study was to present 4-year outcomes and complications after Boston keratoprosthesis (B-KPro) type I implantation in patients from the Middle East region.

In total, 16 eyes of 16 patients (mean age: 56.3 ± 4.1 years), who had undergone B-KPro type I implantation and completed 4 years of follow-up, were retrospectively reviewed.

After a long-term follow-up of 4 years, B-KPro type I implantation improved and maintained vision, both as a secondary procedure in patients with multiple graft failures and primary procedure in conditions with poor prognosis for corneal transplantation. However, the outcomes in cases with autoimmune disorders are less favorable. The retention rate found in the current case series is in agreement with previous reports from the Middle East as well as the other parts of the world. 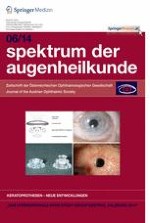 The Boston keratoprosthesis 2014: a step in the evolution of artificial corneas

Causes of sterile vitritis in the setting of Boston keratoprosthesis

Keratoprosthesis in the Filatov Institute: development, study, and results of application