An internal hernia is defined as a protrusion from intestines or other abdominal organs through a congenital or acquired aperture within the peritoneal cavity. Internal hernia are rare, with an incidence of less than 1%. Mostly, they are located paraduodenal (Treitz hernia) and show mortality rates up to 50%.

We describe the case of a 26-year-old man presenting with acute bowel obstruction and a history of surgical treatment for a congenital diaphragmatic hernia.

We present the first description of a young man with an internal hernia due to an intraperitoneal aperture formed by his appendix fused to the spleen. Internal hernia are difficult to diagnose but should be included in the differential diagnosis in cases of intestinal obstruction. CT should be performed in cases of suspicion. Surgical intervention shouldn’t be delayed in order to reduce the high morbidity and mortality rates.
Hinweise

An internal hernia is defined as a protrusion from the intestines or other abdominal organs through a congenital (for example omental foramen) or acquired (post-surgery, post-traumatic, post-infection) aperture within the peritoneal cavity. Internal hernia are rare, with an incidence of less than of 1%. Mostly, they are located paraduodenal (Treitz hernia) [1‐3]. 0.6–5.8% of all small intestine obstructions are caused by internal hernia, with mortality rates of 50% [2, 4, 5]. We describe the case of a young man presenting with acute intestinal obstruction attributed later to a very rare type of an acquired internal hernia on exploratory laparotomy, which has not been described so far.
Anzeige

A 26-year-old male presented to our emergency department with mainly left-sided abdominal pain, nausea, and vomiting. He did not report any fever, dysuria, or change in bowel habits. His past surgical history was remarkable for a congenital diaphragmatic hernia (Bochdalek hernia) with a dystopia of intraabdominal organs (stomach, spleen, and parts of his small and large intestine) in his thoracic cavity. Therefore, he underwent emergent surgery after birth with reposition of his organs and closure of pleura and peritoneum. After one month he relapsed and was treated with a latissimus dorsi flap. On physical examination, abdominal tenderness without any resistance was detected. His laboratory results showed elevated white blood cells (WBC) 15.5 × 109/l WBC (reference value 3.5–9.8 × 109/l). We then performed ultrasound, abdominal X‑ray, and CT scan, which detected a mechanical small intestine obstruction with 4 cm dilated small intestine loops and distal bowel collapse. Furthermore, the spleen was dislocated to ventral-caudal.
The patient underwent an exploratory laparotomy due to notable adhesions of the small intestine after Bochdalek hernia repair in the past. The intraoperative surprise was that of an atypical appendix, which had a total length of 15 cm and was fused to the spleen. In total, the appendix, medial sigmoid colon, and dorsal trunk formed an aperture within the peritoneal cavity causing protrusion and strangulation of the small intestine (Figs. 1 and 2). We performed a classical open appendectomy and resection of 40 cm chronically altered small intestine followed by a side-to-side anastomosis of the jejunum 100 cm distal from the duodenojejunal flexure. The histological examination confirmed necrotic small intestine mucosa. Postoperative recovery was delayed by a persistent atony solved by prokinetic methods. The patient was discharged on the twelfth postoperative day.
×
×

An internal hernia is defined as a protrusion from intestines or other abdominal organs through an aperture within the peritoneal cavity which can be congenital or acquired. In decreasing order and depending on their location, they can be grouped as follows: paraduodenal hernia (Treitz, 53%), pericecal hernia (Rieux, 13%), hernia through the foramen of Winslow (8%), transmesenteric (Petersen) and transmesocolic hernia (8%), intersigmoid hernia (6%), and retroanastomotic hernia (5%). Paravesical hernia represent 7% of all internal hernia, even if they are not considered as internal hernia in the broadest sense [1, 2].
Internal hernia are rare, but transmesenteric, transmesocolic, and retroanastomotic hernia are increasing due to more and more Roux loops, especially in bariatric surgery [1, 3, 5].
Anzeige
In adults, previous abdominal surgery can lead to internal herniation by creating new intra-abdominal spaces. Our patient underwent abdominal surgery as a little child, with reposition of his intraabdominal organs suffering from congenital diaphragmatic hernia which could have caused his special pathology.
Clinical presentation of an internal hernia is nonspecific. They can be asymptomatic as well as presenting as a colic-type intestinal cramp with or without nausea or vomiting. In any case of suspicion, a CT scan should be performed [4]. In most cases, symptomatic internal hernia have to be treated surgically [6]. No case of an internal hernia caused by an atypical appendix fused to the spleen and thus forming an aperture within the peritoneal cavity leading to a protrusion of small intestine has been described to date.

We report the first description of a young man presenting clinically with an acute intestinal obstruction due to an intraperitoneal aperture formed by a fusion of the appendix to the spleen.
Internal hernia are rare and difficult to diagnose, but they should be included in the differential diagnosis in cases of intestinal obstruction and a history of abdominal surgery. To reduce the high morbidity and mortality rates, surgical intervention shouldn’t be delayed.
To our best knowledge, this is the first description of this kind of internal hernia, which is not yet included in the internal hernia classification system.

J.P. Ramspott, T. Jäger, K. Emmanuel, and P. Schredl declare that they have no competing interests.

For this article no studies with human participants or animals were performed by any of the authors. Written informed consent was obtained from the patient before writing the case report.
Open Access This article is distributed under the terms of the Creative Commons Attribution 4.0 International License (http://​creativecommons.​org/​licenses/​by/​4.​0/​), which permits unrestricted use, distribution, and reproduction in any medium, provided you give appropriate credit to the original author(s) and the source, provide a link to the Creative Commons license, and indicate if changes were made. 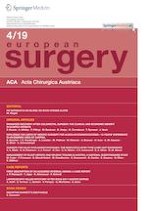