Extended use of the modified Berlin Definition based on age-related subgroup analysis in pediatric ARDS | springermedizin.at Skip to main content
TOOLBAR 1 2 3 4
SUCHE MENÜ 1 2 3 4

Acute respiratory distress syndrome (ARDS), as first described by Ashbaugh et al. in 1967 [ 1], remains a therapeutical challenge for intensive care specialists. Pediatric ARDS (pARDS) can be described as a rare disease with an incidence of 2–12/100,000 per year. The low number of patients with pARDS makes it a challenging task to conduct clinical trails with conclusive results [ 2, 3]. At present, the overall mortality rate in pARDS is approximately 24% [ 4]. Over many years, pediatric intensive care specialists have used the American–European Consensus Conference (AECC) definition of ARDS for clinical care, research, and prognosis [ 5]. Limitations of the AECC definition of ARDS have recently been addressed by the Berlin Definition (BD) for adult patients, but pediatric-specific considerations were not included in these definitions [ 5, 6]. Although there are similarities in the pathophysiology of ARDS in adults and children, pediatric-specific therapies, comorbidities, and differences in outcome demand a more specific definition for pARDS patients [ 7]. In this context, a major limitation of the adult BD is the necessity for invasive measurement of arterial blood gas. Pulse oximetry increasingly prevents the use of arterial blood gas measurement in children, and therefore a definition requiring direct blood gas analysis may underestimate the prevalence of pARDS. Moreover, recent evidence shows that arterial catheters are an under-recognized source of infection and this may continue to contribute to a shift in practice patterns away from the routine use of such arterial catheters [ 8] and consequently PaO 2 measurements. Several studies have demonstrated that the SpO 2/FiO 2 ratio (S/F ratio) can be used instead of the PaO 2/FiO 2 (P/F ratio) when the SpO 2 is <97% [ 9– 12].
In October 2013, De Luca et al. published a multicenter study with the main goal of investigating the validity of BD in infancy and early childhood [ 13]. Our study attempts to extend the systematical data collection and provide a more detailed description of pARDS patients divided into age-related subgroups (full-term newborns 0–28 days, infants 1–12 months, children 1–6 years, children 6–18 years). ARDS etiology (direct and indirect lung injury), severity of ARDS according to the modified BD, and five types of supportive treatment options were also investigated: inhaled nitric oxide (iNO), surfactant, corticosteroids, prone position, and extracorporeal membrane oxygenation (ECMO).
Anzeige
The objective of this study was to describe a cohort of patients with pARDS using the modified BD with the S/F ratio in order to establish an extended patient registry divided into age-related subgroups. A further aim of this study was to provide feedback to clinicians about their daily work concerning the quality of treatment and possible options for the improvement of treatment in the future.

After the approval of the ethics committee (Medical University of Vienna; Ethic Nr. 1860/2012) the patient records of all children admitted to our pediatric intensive care unit (PICU) between 2005 and 2012 were screened for eligibility. Because of the retrospective character of this study, informed consent was waived and the study was performed in accordance with the Declaration of Helsinki.
The data of 219 children—aged between full-term newborns and <18 years—with respiratory failure according to the modified BD of ARDS [ 6] were reviewed for inclusion in the study. Only patients with complete records were included. The 93 patients finally included were divided into three groups according to the ARDS etiology, direct and indirect lung injury, and a third group of ARDS patients with unknown etiology. Preterm newborns with a corrected age of >38 weeks of gestation at the time of admission were not excluded from the study. The following data were extracted from patient files: age (years), gender, weight (kg), duration of PICU stay (days). Primary diagnosis, relevant secondary diagnosis, and chronic or congenital diseases or developmental disorders were noted. The modes and duration of mechanical ventilation (MV) and ventilator settings were recorded. Oxygenation was evaluated by recording arterial blood gas samples and SpO 2. If arterial blood gas samples were not available, the S/F ratio was used as a surrogate for P/F ratio [ 10– 12]. Additional supportive treatment beside MV, such as iNO, surfactant, corticosteroids, prone positioning, and ECMO were noted. Outcomes were defined as survival of PICU stay.
Chest radiographs and levels of oxygenation were collected on day 1, day 3, and day 7 of PICU stay. However, these radiographs were not available for all patients for each of the 3 days, and thus patients were included if at least one chest radiograph was available. The chest radiographs were anonymized and examined by an independent radiologist.
Anzeige
Data analysis was performed using IBM SPSS Statistics Version 21.0 (IBM Deutschland GmbH, Ehningen, Germany). For statistical analysis, the chi-square test or Fisher’s exact test and independent-samples Kruskal–Wallis test were used. Results were accepted as statistically significant at p < 0.05. Data are presented as median and interquartile ranges or as percentages.

During the study period 2005–2012, 219 patient records were screened for eligibility criteria and 93 children were included in the study. We excluded 126 patients owing to missing data or chest radiographs. Table  1 shows the demographic data of all study patients. Because of the heterogeneity of the patient collective with a range in age from 0 days to 16.8 years, patients were divided into age-related subgroups to account for age-specific conditions and differences. The subgroup of school children was not divided any further owing to the small number of patients of this age. Seven patients (7%) had a history of preterm birth but had reached a corrected age of >38 weeks of gestation at admission and therefore were included.
Table 1
Demographic data of study patients
IQR interquartile range, F female, M male, PICU pediatric intensive care unit
Table  1 also shows the number of patients stratified into age-related subgroups and gender. There were more male patients in the age groups of newborns and infants, but the gender distribution between age-related subgroups was not significantly different ( p > 0.05). There was an overall majority of males in this study and no significant difference of survival was recorded between male and female patients (77% vs. 78%; p > 0.05).
The median duration of PICU stay was 16 (10–27) days. In total, 66 patients (71%) had direct lung injury, 18 patients (19%) had indirect lung injury, and nine patients (10%) had lung injuries of unknown origin. No significant difference was found between the age-related subgroups concerning type of lung injury. Survival of patients with direct lung injury was 80% vs. 67% in patients with indirect lung injury. The survival of patients with direct lung injury was higher, but not significant ( p > 0.05). The most common diagnosis leading to pARDS was viral pneumonia (21%), followed by nonspecified respiratory failure (16%) and bacterial pneumonia (15%). In 4% of all cases, the primary diagnosis was congenital heart defect (CHD). These patients developed pARDS additionally and secondary to their primary diagnosis of CHD during their PICU stay. The etiology of pARDS within the age-related subgroups is shown in Table  2. Viral pneumonia was among the most common causes of pARDS in infants (51%) and toddlers (23%). In children older than 6 years, bacterial pneumonia was the most common cause of pARDS with four patients (36%) presenting this diagnosis. The severity of pARDS according to BD on the day of admission is shown in Fig.  1. There was no significant difference in the survival rate or the duration of MV according to the severity of ARDS. Severity was also not significantly different among age-related subgroups ( p > 0.05).
Table 2
Etiologies of pARDS
d days, mo months, y years, MAS meconium aspiration syndrome, CDH congenital diaphragmatic hernia, CHD congenital heart defect, CF cystic fibrosis
×
There were significant differences in the mode of ventilation used between the age-related subgroups ( p < 0.001). Pressure-controlled ventilation was used in all age-related subgroups and was the leading mode of MV in patients older than 1 month. Noninvasive ventilation was used in two newborns and one school child. The median duration of MV was 12 days (7–22). The duration of MV was not significantly different among age-related groups.
Five types of supportive therapy options were investigated: iNO, surfactant, corticosteroids, prone positioning, and ECMO. Of all the patients, 75 (80%) received more than such treatment option. An overview of additional supportive treatments is listed in Table  3. A combination of three types of supportive therapies was most frequently applied to patients ( n = 27, 29%). Eight patients (9%) received nonsupportive therapy beside MV and seven patients (7%) received all five supportive therapies. The impact of each single type of therapy was not analyzed separately. Despite the large number of different combinations of supportive treatment options, the combination of iNO, surfactant, corticosteroids, and prone positioning was the most common combination—used in 13 cases. Table  3 shows the overall frequency of supportive therapy applied to the study patients. The distribution of treatment strategies between the age-related subgroups is shown in Fig.  2. In total, 81% of all patients received more than one supportive therapy, and thus the distribution refers to the total number of supportive therapies used (and not to the number of patients). ECMO was used in 23 children, most of whom were <1 year. The median duration of ECMO was 11 days (7–16). The overall survival rate of patients who received ECMO was 52%.
Table 3
Supportive therapy options a
iNO inhaled nitric oxide, ECMO extracorporeal membrane oxygenation
aMost of the patients ( N = 76, 76%) received corticosteroids as supportive therapy beside mechanical ventilation. About every second patients was placed in prone position and treated with surfactant. Most of the patients had three different supportive therapies
×

No specific funding was received for this study.

M. Hermon, S. Dotzler, J.B. Brandt, W. Strohmaier, and J. Golej declare that they have no competing interests and financial potential conflicts do not exist.

All procedures performed in studies involving human participants were in accordance with the ethical standards of the institutional and/or national research committee and with the 1964 Helsinki declaration and its later amendments, or comparable ethical standards. For this type of study (retrospective study) informed consent is not required. This study was done with the approval of the of the ethics committee (Medical University of Vienna; Ethic Nr.-1860/2012).
Open Access This article is distributed under the terms of the Creative Commons Attribution 4.0 International License ( http://​creativecommons.​org/​licenses/​by/​4.​0/​), which permits unrestricted use, distribution, and reproduction in any medium, provided you give appropriate credit to the original author(s) and the source, provide a link to the Creative Commons license, and indicate if changes were made. 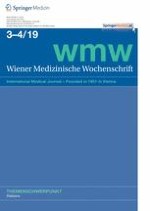 Bone marrow aspirations in oncological patients: experience from an in-house standard in paediatrics