In ten male Sprague-Dawley rats, the ulnar nerve was transferred to the motor branch of long head of the biceps. Sham surgery was performed in five animals (exposure/closure). After 12 weeks of regeneration, muscle force and Bertelli test were performed and evaluated.

The nerve transfer successfully reinnervated the long head of the biceps in all animals, as indicated by muscle force and behavioral outcome. No aberrant reinnervation occurred from the original motor source. Muscle force was 2,68 N ± 0.35 for the nerve transfer group and 2,85 N ± 0.39 for the sham group, which was not statically different (p = 0.436). The procedure led to minor functional deficits due to the loss of ulnar nerve function; this, however, could not be quantified with any of the presented measures.

The above-described rat model demonstrated a constant anatomy, suitable for nerve transfers that are accessible to standard neuromuscular analyses and behavioral testing. This model allows the study of both neurophysiologic properties and cognitive motor function after nerve transfers in the upper extremity. 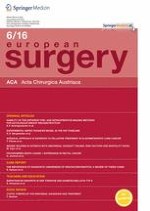 Erratum to: Surgical approach is superior to palliative treatment in oligometastatic lung cancer