A remarkable number of investigations are available treating tibial non-unions by exchange reamed nailing (ERN). Only few authors reported positive results after augmentation compression plating (ACP) for the same entity. To our knowledge no systematic study is published comparing ERN vs. ACP, so that this trial compares ACP leaving the already inserted un-reamed nail in situ against ERN in the treatment of aseptic tibial non-union, analysing success rate, time for union and operation time.

ERN and ACP with remaining pre-existing nail in situ are both safe and straightforward surgical procedures with equivalent high success rates of about 95 %. ACP has the advantage of less time for union and operating time in this series, but is associated with the disadvantage of requiring an additional incision and complaints associated to the plate requiring implant removal. 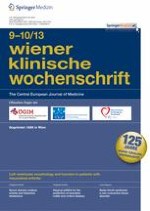 Bronchogenic cyst of stomach: two cases report and review of the English literature

Socio-economic determinants of health behaviours across age groups: results of a cross-sectional survey

Moderate- and vigorous-intensity exercise behaviour according to the Transtheoretical Model: associations with smoking and BMI among Austrian adults