The general features and comorbid diseases of the pancreatic cancer patients were retrospectively screened from the patient files using the automated system. CCI and CIRS were used as the comorbidity indices.

The results on the use of comorbidity indices are contradictory for the cancers with lower survival rates such as pancreatic cancer. New prognostic scales might be developed for this patient group by considering the side effects of chemotherapy. 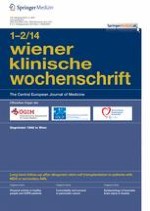 Association of inverted Takotsubo cardiomyopathy with postpartum pneumo-mediastinum: when a “broken lung” meets a “broken heart”