The objective of the study was to gather information about elderly major trauma patients admitted to one particular Slovenian trauma centre in Celje and examine this group of polytrauma patients, specifically with respect to mechanisms of injury, injury severity and distribution of injuries. Further on, to identify morbidity and mortality rates and compare these to the younger population and, finally, to determine the factors that have the most impact on treatment results.

The study gathered and evaluated data of 532 patients included in the Trauma Register DGU® of the German Trauma Society (TR-DGU) during a 10-year period and two distinct groups of patients were established, separated on account of age as older or younger than 65 years. The differences between these two groups were analyzed with respect to demographics, comorbidities, preclinical management, injury patterns, relevant clinical and laboratory findings. Furthermore, differences between deceased and surviving elderly patients were also analyzed.

The majority of elderly patients suffered from a blunt mechanism of trauma (96.6%) and of these simple falls represented 47.9% within this injury mechanism. There were two body regions, which were most frequently represented, namely head and thorax injuries, accounting for 54.7% each. Complications were more frequent among the elderly, with sepsis being present in 29.9% and multiple organ failure (MOF) in 19.7% of cases. Cardiovascular failure was also high in both the elderly and young, accounting for 45.3% of the elderly and 31.3% of the younger population. The in-hospital mortality rate for the elderly group was 25.6% and was significantly higher compared to the younger counterparts (14.7%). Low fall mechanism of injury, coma and the new injury severity score (NISS) were statistically important factors for the mortality of seriously injured elderly patients during the acute phase of treatment.

Despite advances in care, morbidity and mortality in elderly patients after major trauma remains considerably higher than in younger populations with head injuries accounting for the majority of fatalities. The elderly patient population in this study mostly suffered from blunt mechanisms of injury, with simple falls representing a high proportion of injury mechanisms. Generally, the injury severity scale (ISS) in the elderly is not statistically higher than with the younger population. Likewise, the distribution of injuries according to body regions is also similar; however, the elderly are more prone to complications (e. g. sepsis and MOF), which is likely due to a lower physiological reserves. 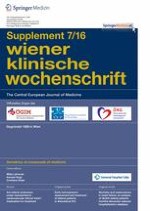 Are elderly and women under-represented in cardiovascular clinical trials? Implication for treatment

The relativity of age or geriatric medicine at the crossroads