Smoking cessation is one of the most powerful health promotion tools in the Western world. Behavioral group therapies are regarded as very promising interventions in this field. Quitting rates are usually evaluated after 6–12 months and lie between 30 and 45%. So far, there are no scientific data on potential protective indicators to remain successfully smoke free after this period. Therefore, the aim of this study was to detect the current smoking status of former participants of a cessation service in an urban German surrounding. We investigated reasons for relapses, quitting strategies, and psychosocial parameters.

In 2019, 130 former patients (2011–2017; mean age 54 years; 37 pack/years; Fagerstroem = 5.75; 58.5% male, 41.5% female; 66% physical comorbidities; 35% psychiatric diagnoses) were invited to participate in a mailed survey (including WHO 5, SF 12, self-efficacy scale) and were asked about their current smoking status, personal history of smoking, and individual experiences with stopping after the 1‑year abstinence date.

A total of 53 persons replied (RR 41%), 29 (54%) of whom are currently smoke free; 24 relapsed intermittently or permanently, 9 experimented with e‑cigarettes, and 2 became dual users. Daily hassles as well as physical and mental challenges were the main reasons for relapsing.

Due to the low response rate, conclusions are limited; however, the 1‑year abstinence rate might not be as reliable as thought so far; long-term “sober” nicotine addicts remain at risk of relapse.
Anzeige
Vorheriger Artikel What is the significance of guidelines in the primary care setting?
Nächster Artikel Mentored undergraduate operating room teaching during the orthopedic trauma curriculum—No evidence of gender differences 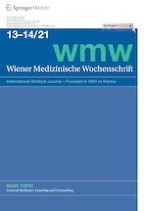 What is the significance of guidelines in the primary care setting?