Evaluation of left ventricular functions in patients with primary hyperparathyroidism: is there any effect of parathyroidectomy? | springermedizin.at Skip to main content
TOOLBAR 1 2 3 4
SUCHE MENÜ 1 2 3 4

A total of 22 eligible consecutive patients with pHPT who underwent parathyroidectomy operation were recruited to the study. Another 22 subjects with similar age, gender and frequency of cardiovascular risk factors compared to patients were used as a control group. Echocardiographic parameters of patients scheduled for parathyroidectomy were compared to healthy matched controls. Echocardiographic parameters measured 6 months after the operation were also compared with preoperative values for each patient. 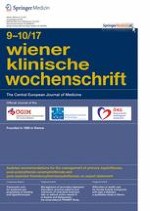 Tranexamic acid for treatment and prophylaxis of bleeding and hyperfibrinolysis

Management of secondary hyperparathyroidism: practice patterns and outcomes of cinacalcet treatment with or without active vitamin D in Austria and Switzerland – the observational TRANSIT Study

Role of hematological parameters in prediction of complicated appendicitis

Difficulties in health care for female Turkish immigrants with type 2 diabetes: a qualitative study in Vienna