The Hungarian Health Insurance Fund, using appropriate information technology, covers all of the secondary care of the country and maintains a database of Hospital Discharge Records (HDR). Our study aimed to determine the incidence, average age-at-diagnosis (AaD), and prevalence of myasthenia gravis (MG) among adults and the regional heterogeneity of these measures to assess the potential usefulness of HDRs for monitoring. 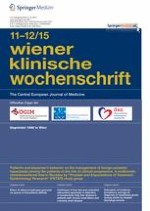 Size, edge, and stage of NSCLC determine the release of CYFRA 21-1 in bloodstream

The accuracy of urinary ultrasound in the diagnosis of urinary stone disease in patients with acute flank pain: is it influenced by the time of ultrasound performance during the day or week?