Previous epidemiological analyses indicated a decreasing trend of suicide rates for 10–19-year-olds in Austria for the period 1970–2001. However, data from the new millennium are missing. This epidemiological update reports on youth suicide in Austria, covering the period 2001–2014 in order to inform suicide preventive interventions targeting adolescents.

The data on registered suicides among Austrian minors (10–19 years) and the population size were obtained from Statistics Austria. Chi-squared tests were used to analyze the associations between the suicide methods used and sex, as well as between suicide methods and Austrian federal states. Spearman correlations were calculated to assess time trends in the suicide rates. One-way ANOVA was used to investigate annual suicide rates of age groups 10–14, 15–19, and 10–19 years across the nine Austrian federal states.

The total average suicide rate for Austrian minors was 4.57 per 100,000. The male–female ratio was 3.5:1. The total youth suicide rate and male suicide rate significantly declined from 2001 to 2014, whereas there were no significant changes in female rates. More than one third of suicides among Austrian youth occurred through hanging, whereas jumping in front of a moving object was the second-most common suicide method. A spring peak was found, with most suicides occurring in April and May.

Suicide rates among minors in Austria continue to decrease. The present findings help to inform the ongoing implementation of the National Austrian Suicide Prevention Plan (SUPRA). 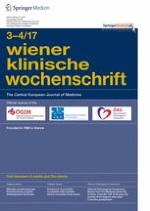 Gait disorders in adults and the elderly

Effect of electroacupuncture in patients with post-stroke motor aphasia