Presence of an AmpC β-lactamase was confirmed in all isolates by combined-disk test with phenylboronic acid. All isolates were resistant to amoxicillin alone and combined with clavulanate, cefotaxime, ceftriaxone, cefoxitin, and ciprofloxacin; but susceptible to cefepime, imipenem, and meropenem. PCR followed by sequencing using primers targeting bla ampc genes revealed CMY-16 β-lactamase in all but one strain. Bla cmy-16 was carried by a non-conjugative plasmid which did not belong to any known plasmid-based replicon typing (PBRT) group. Rep-PCR identified one large clone consisting of 15 isolates, three pairs or related isolates, one triplet, and four singletons. PFGE confirmed the clonality of the isolates.

This is the first report of multidrug resistant P. mirabilis in a nursing home in Croatia. Cephalosporin resistance was due to plasmid-mediated AmpC β-lactamase CMY-16. 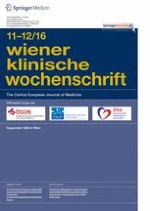 Detection of Epstein–Barr virus in inflammatory pseudotumour of the spleen: a case report

MUW researcher of the month Juni