Despite several surgical techniques in the treatment of pilonidal sinus, the ideal management is still under debate. Recently, Limberg flap has revealed promises owing to a lower recurrence rate. Our study aimed to assess mid-term outcomes of Limberg flap in patients with pilonidal abscesses.

Through a prospective case–control study, we enrolled 90 consecutive patients with pilonidal disease attending department of surgery in one of the university hospitals in Tehran, Iran, between January 2010 and April 2011. Patients with simple sinus (control group) underwent wide excision of the sinus, while those with infected pilonidal abscess received incision and drainage of the abscess and then excision (case group), and ultimately all the patients were treated with Limberg flap. Patients were followed by regular outpatient visits at 1 week, 2 weeks, 1 month, 6 months, and 1 year.

This study showed that Limberg flap is effective in the surgical treatment of infected pilonidal abscess, with desirable mid-term outcomes. 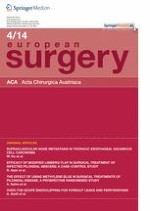 Two class medicine: the essence hits it all