The aim of this study was to assess the outcome of COPD in clinical practice under real-world conditions in Taiwan as measured by pulmonary function and systemic inflammation parameters (C-reactive protein (CRP) or white blood cell (WBC)) after initiation of guideline-oriented pharmacotherapy.

Guideline-oriented pharmacotherapy of COPD improves airflow limitation but does not prevent the alveolar destruction and systemic inflammation under real-world conditions in Taiwan. 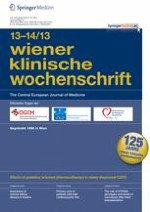 Seroprevalence of Rubella in northeastern Turkey

The early prediction of neonatal morbidity and mortality in singleton small for gestational age infants with a birthweight < 1,500 g