Adherence to evidence-based guidelines is essential for the treatment outcome of psychotic disorders. Previous studies showed that IT-supported pathways are able to increase guideline adherence in psychiatric care. This paper describes a pilot study on the development of an electronic recall-reminder-system (RRS) for supporting guideline-adherent treatment in outpatient care of patients with chronic psychotic disorders and analyses its feasibility.

Guidelines were integrated in the RRS software M.E.M.O.R.E.S. Software training for the staff was provided. We compared the number of conducted vs. guideline-recommended interventions 6 months before and after implementation. Subsequently both the caregivers’ and the patients’ satisfaction with the RRS was evaluated.

Guideline adherence in general was low and the RRS was barely used. After its implementation a significant increase was observed in chemogram-check-ups and diagnostics regarding cardiovascular risks (esp. ECG). Both patients and professionals described problems with integrating the RRS in their daily routine and questioned the usefulness of the guidelines for chronically ill, although they basically approved its importance and usefulness.

Participants appreciated the idea of supporting guideline adherence with an IT-system, but there seemed to be major obstacles to implementation: caregivers appear to be concerned of being exposed or questioned, technical difficulties might lead to avoidance, and there seems to be a lack of knowledge and awareness about the health risks for individuals with psychotic disorders. Possibly guidelines adapted for the chronically ill would find more acceptance. Technical simplifications and better information should be considered prior to further attempts to implement IT-supported guidelines in order to increase acceptance. 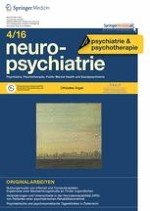 Erratum to: The influence of reported ADHD and substance abuse on suicidal ideation in a non-clinical sample of young men