STW 5 (Iberogast®; Steigerwald Arzneimittelwerk GmbH, Darmstadt, Germany) contains nine plant extracts and possesses well-documented overall efficacy in functional gastrointestinal disorders (FGID). Little is known about the onset of symptom relief. Twenty-nine centers in Germany recruited 272 patients with established FGID. These patients were treated with STW 5 for approximately 3 weeks in this noninterventional study. Patients assessed the severity of their gastrointestinal complaints before and at defined times after the intake of STW 5 (10 cm visual analogue scale; VAS). Fifteen minutes after the first dose, the severity of gastrointestinal complaints had decreased by 1.4 cm (mean; initial mean: 5.2 of 10 cm). After 1 h, more than 90% of the maximum effect of 3.2 cm on the 10 cm VAS had been reached. Most patients with symptoms experienced a marked improvement within 5, 15 or 30 min of taking STW 5. Absolute improvements were larger in patients with more pronounced baseline complaints. Subgroups with upper (80% of the study population) and lower FGID (20%) did not present major differences. Neither did subgroups by age and duration of complaints. Treatment with STW 5 resulted in rapid improvement of symptoms. 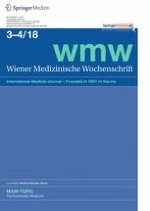 Psychosomatic medicine – viability of a discipline

The role of psychosomatic medicine in intensive care units

The emergence of vancomycin-resistant Staphylococcus aureus in an intensive care unit in Kerman, Iran