Acute coronary syndrome (ACS) is a serious and life-threatening clinical manifestation of atherosclerosis. It is characterized by a thromboembolic event leading to a sudden reduction in blood flow to the heart [ 1]. An ACS presents as one of several sub-types, including ST segment elevation myocardial infarction (STEMI), non-ST elevation myocardial infarction (NSTEMI), and unstable angina. European Society of Cardiology (ESC) guidelines for the management of ACS acknowledge that secondary prevention of cardiovascular events requires treatment of dyslipidemia, if present [ 1, 2]. Specifically, long-term treatment of low-density lipoprotein cholesterol (LDL-C) serum levels to a target value of <70 mg/dl (1.8 mmol/l) is recommended, with high-dose statins and ezetimibe as the preferred lipid-lowering therapy (LLT; [ 2, 3]). These targets have been confirmed by the guidelines for the management of dyslipidemia published by the European Society of Cardiology (ESC) and the European Atherosclerosis Society (EAS) task force in 2011 [ 4].
Germany has made several improvements in the management of cardiovascular disease risk factors in ACS patients. Rates of treatment of dyslipidemia in patients with a history of ACS increased from 35% to 87% between 1995 and 2007 [ 5], and nationwide implementation of smoking restrictions in 2007–2008 was followed by 13.3% and 8.1% declines, respectively, in the annual rates of hospitalization for angina pectoris and myocardial infarction (MI; [ 6]); however, rates of hospitalization for MI in Germany remain well above the median for European countries [ 7]. An analysis of the German 2L registry of patients with coronary heart disease (CHD) showed that most patients treated for dyslipidemia received low-intensity statin regimens [ 8]. Not surprisingly, the Dyslipidemia International Study (DYSIS) found that, among statin-treated patients in Germany, 58.1% failed to attain the LDL-C target value for high risk patients (<100 mg/dl; 2.6 mmol/l) [ 9], and a large German population-based cross-sectional study found that among statin-treated CHD patients, the estimated 10-year risk of a coronary event was 35.1%, well above the threshold for LLT [ 10].
Anzeige
Given the state of cardiovascular management in Germany and the current guidelines for treatment of ACS, the primary objective of the second DYSIS (DYSIS II) was to document utilization of LLT, LDL-C target value attainment, and cardiovascular health outcomes in patients hospitalized for ACS in Germany.

The DYSIS II is an international, multicenter, observational study being conducted throughout Europe, Asia, and the Middle East to determine the prevalence of dyslipidemias and lipid target value attainment in patients with stable CHD and in patients hospitalized for an ACS event. The ACS cohorts were assessed longitudinally as described later. All data were collected via a web-based data collection form using software developed by the Institute for Heart Infarction Research ( Institut für Herzinfarktforschung, IHF) in Ludwigshafen, Germany.
In the German ACS cohort, 21 sites participated in data collection from consecutive patients. Acute care centers were selected to be representative of the acute and ambulatory treatment of secondary prevention in Germany. The patient recruitment period was May 2013 to July 2014. Data were collected by clinical examination and from medical charts at admission to the hospital, and again via a telephone interview at 120 ± 15 days after admission (the follow-up time point). At the time of enrolment, patients were given a booklet and instructed to take it with them when they next visited their physician post-discharge (from current hospitalization). The booklet was filled out during the follow-up office visit by the physician and registered the patient’s lipid profile and other basic patient characteristics. The information in the booklet was to be used by the patient during the follow-up telephone interview. The protocol was approved by local and regional institutional review boards as per local regulations.

Patients included in the current analysis were ≥18 years of age, had been hospitalized for ACS in Germany, and had a full lipid profile based on blood drawn within 24 h of admission. Patients must have been on LLT for ≥3 months, or not taking LLT at all, at the time of admission to the hospital. Patients taking LLT for <3 months were excluded from the analysis. Each patient provided written informed consent specifying non-participation in any randomized clinical trials and would not do so for the duration of the study.
Anzeige

In this study, ACS was defined as one or more of the following events: STEMI/left bundle branch block (LBBB), NSTEMI, or unstable angina. Demographic and clinical characteristics collected at admission included age, gender, body mass index, sedentary life style, smoking status, and family history of CHD. Comorbidities (e. g., hypertension, type 2 diabetes mellitus) and cardiovascular history (of CHD, MI, chronic renal failure, chronic kidney disease, stroke, or peripheral vascular disease) were also recorded. Obesity was defined according to the World Health Organization (WHO) criteria as having a body mass index >30 kg/m 2. Hypertension was defined as current antihypertensive treatment, a previous diagnosis, or having blood pressure >140/90 mm Hg. Similarly, diabetes was defined as current treatment for diabetes, a previous diagnosis of diabetes, or a fasting plasma glucose level of ≥126 mg/dl. A sedentary life style was defined as <20–30 min of walking on <3–4 days per week. Stroke was either ischemic or hemorrhagic. Use of selected classes of cardiovascular medications (e. g., beta-blockers, calcium channel blockers, diuretics, angiotensin-converting enzyme (ACE) inhibitors, antiplatelet agents) and laboratory values of hemoglobin A1c and serum glucose were also recorded at admission.
Patients were divided into two subgroups, treated or untreated, based on their lipid treatment status at admission, as defined above. Use of LLTs at the time of the lipid test was determined by chart review at admission and by patient report at follow-up. The following mutually exclusive classes of LLT were assessed: statin monotherapy, non-statin monotherapy, statin plus ezetimibe, and statin plus other non-statin therapy (“other” non-statins included fibrates and omega-3 fatty acids). The statins assessed were simvastatin, atorvastatin, rosuvastatin, pravastatin, lovastatin, and fluvastatin. Atorvastatin and simvastatin dose equivalents were calculated based on clinical trial data on the LDL-C-lowering efficacy of various statins [ 11]. Attainment of lipid target values was assessed among treated patients at admission and follow-up, using lipid values determined within 24 h of admission and lipid values determined between admission and the follow-up interview, respectively. The lipid profile included measurement or calculation of serum levels of total cholesterol, LDL-C, high-density lipoprotein cholesterol (HDL-C), triglycerides, and non-HDL-C. The LDL-C target values were assigned according to the patient’s cardiovascular risk, which was determined using two methods. First, pre-ACS risk status (i.e. very high, high, moderate or low) was determined for all patients based on selected patient characteristics, and second, all patients were classified as being at very high risk because of the ACS event leading to hospitalization. Target values for LDL-C for very high risk, high risk, moderate risk, and low risk patients were defined according to the 2011 ESC/EAS guidelines as <70 mg/dl, <100 mg/dl, <115 mg/dl, and <130 mg/dl, respectively [ 4]. Per the same guidelines, the non-HDL-C target value was <100 mg/dl [ 4]. The median distance to the LDL-C target value was calculated for patients who had not attained the LDL-C target value on the date of the lipid profile. Attainment of the secondary non-HDL-C target value (<100 mg/dl) was also assessed at admission and follow-up. Cardiovascular health outcomes assessed at follow-up were rehospitalization, MI, stroke, percutaneous coronary intervention, and coronary artery bypass graft.

This study analyzed the ACS patients on LLT at admission through the follow-up time point. Unless otherwise specified, the designations of “treated” or “on LLT” refer to the treatment status at admission, regardless of the treatment status at follow-up. Demographic and clinical characteristics, use of cardiovascular medications, and cardiovascular outcomes were compared between patients on LLT and not on LLT at admission using χ 2 or Mann-Whitney-Wilcoxon tests. Lipid profiles, LDL-C target value attainment, and types of LLT used at admission and follow-up were assessed descriptively in patients on LLT. In all univariate analyses, continuous variables are presented as means and standard deviations (SDs) or medians and interquartile ranges (IQRs), and categorical variables are presented as numbers and/or percentages. Multivariate logistic regression was used to identify variables predictive of LDL-C target value attainment in patients on LLT at admission. Covariates, including age, gender, obesity, current smoking, sedentary life style, stable angina, chronic kidney disease, type 2 diabetes mellitus, history of congestive heart failure, hypertension and statin dose (i. e., atorvastatin dose equivalent), were chosen based on their potential to affect LDL-C target value attainment, and no statistical selection methods were applied. Assessment of cardiovascular outcomes at follow-up was done using Kaplan-Meier analysis, with P values calculated by a log-rank test. SAS version 9.3 (Cary, NC, USA) was used for all calculations. In all analyses, a  P value <0.05 was considered statistically significant.

Characteristics of the study population

Use of lipid-lowering therapies

This study was funded by Merck & Co., Inc.

D. Lautsch, B. Ambegaonkar, and P. Brudi are employees of Merck & Co., Inc., which funded the study. B. Karmann is an employee of MSD SHARP & DOHME GmbH, a subsidiary of Merck & Co., Inc. A.K. Gitt reports receipt of grants and personal fees from MSD during the conduct of the study and personal fees from Sanofi and Amgen outside the submitted work. J. Rieber received handling fees for patient inclusion from MSD during the study. M. Horack reports that his institution received funding from MSD for recruitment and biostatistics for the DYSIS registry. R. Hambrecht, J. Brachmann, K. Graf, and A. Vyas. report having no conflict of interests.

All human studies were approved by the appropriate ethics committee and have therefore been performed in accordance with the ethical standards laid down in the 1964 Declaration of Helsinki and its later amendments. All subjects provided written informed consent prior to their inclusion in the study.
Open Access This article is distributed under the terms of the Creative Commons Attribution 4.0 International License ( http://​creativecommons.​org/​licenses/​by/​4.​0/​), which permits unrestricted use, distribution, and reproduction in any medium, provided you give appropriate credit to the original author(s) and the source, provide a link to the Creative Commons license, and indicate if changes were made. 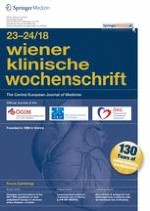