Porokeratosis is defined as a disorder of keratinization characterized by one or more atrophic patches surrounded by a clinically and histologically distinctive hyperkeratotic ridgelike border called the cornoid lamella. Lesions are most commonly located on the sun-exposed sides of trunk and extremities, while exclusive facial involvement has been also reported. Despite that the exact risk of cutaneous malignancy developing in porokeratosis is unknown, it is confirmed by series of case reports, including squamous cell carcinoma, basal cell carcinoma and even melanoma. Although no definite cure exists, a number of treatment modalities, from topical medications to laser and light devices, have been reported with variable success. Although promising, reports of disseminated superficial actinic porokeratosis treated with vitamin D3 analogs are rare. No satisfactory enough effect is obtained also with calcipotriol monotherapy.
We report a case of disseminated superficial actinic porokeratosis in a 80-year-old female patient, successfully treated with combination of topical calcipotriol/betamethasone gel. A significant improvement was noticed after 3 weeks; almost full resolution of the clinical symptoms without appearance of fresh lesions was achieved in the second month. To the best of our knowledge, this is the first report of successful treatment with full resolution in a short interval, by simultaneous application of vitamin D3 analog (calcipotriol) and corticosteroid (betamethasone), combined in a one commercial product as a gel for treatment of keratinocyte proliferation’s disorder such as psoriasis vulgaris. This promising new entity seems to be more effective, because of the simultaneous synergetic effects of the substations, namely the normalization of the proliferation of the keratinocytes by calcipotriol on one hand, and the reducing of the inflammation by the corticosteroid on another. Sun protection stays always mandatory, as well as the regular clinical observation, regarding the risk of malignant transformation.
Anzeige
Vorheriger Artikel Progredient dermatophytosis and nevus anemicus: a pathogenetic mediated relationship
Nächster Artikel ASIA – a dangerous beauty? 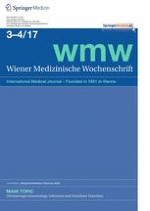