Differences in the metabolic status of healthy adults with and without active brown adipose tissue | springermedizin.at Skip to main content
SUCHE MENÜ 1 2 3 4

Previous studies have proven the existence of active brown adipose tissue (BAT) in adults; however, its effect on systematic metabolism remains unclear.

The current study was designed to investigate the differences in the metabolic profiles of healthy adults with and without active BAT using positron emission tomography–computed tomography (PET-CT) scans in the un-stimulated state.

A cross-sectional analysis was performed to assess the health of adults using PET-CT whole-body scans at Huashan Hospital Medical Centre between November 2009 and May 2010. A total of 62 healthy adults with active BAT were enrolled in the BAT-positive group. For each positive subject, a same-gender individual who underwent PET-CT the same day and who had no detectable BAT was chosen as the negative control. Body composition was measured, and blood samples were collected for assays of metabolic profiles and other biomarkers.

In both the male and female groups, BAT-positive individuals were younger and had lower body mass indexes, fasting insulin, insulin resistance, and leptin, but a greater level of high-density lipoprotein cholesterol compared with the negative controls. In the male group, body fat content and levels of tumor necrosis factor-α were significantly lower in the BAT-positive than in the negative control group.

The healthy adults with active BAT in an un-stimulated state had favorable metabolic profiles suggesting that active BAT may be a potential target for preventing and treating obesity and other metabolic disorders.
Anzeige
Vorheriger Artikel Life-threatening complications of deep neck space infections
Nächster Artikel Diagnosing celiac disease in patients with a history of lymphoma: factors that matter 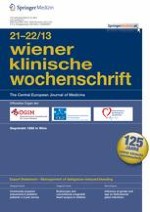 Do gender and age influence the frequency of Helicobacter pylori infection?