Austria is a federal republic in Central Europe with over 8.7‚ÄĮmillion inhabitants [ 1], consisting of 9 federal states and the states are comprised of 79 districts and 15 statutory cities. In Austria, there are approximately 270 hospitals, of which 178 provide acute inpatient care. With 7.7 hospital beds per 1000 inhabitants, Austria has the fourth highest number of hospital beds among all Organisation for Economic Co-operation and Development (OECD) countries, after Japan, South Korea and Germany [ 1]. Life expectancy at birth in Austria (81.2 years in 2013) has increased by 11 years since 1970 and is slightly higher than the average in other OECD countries. With 4.8 physicians per 1000 residents, Austria has the second highest physician-to-population ratio in the EU, after Greece. The number of nurses per 1000 residents is slightly below the EU average of 27 [ 1]. The Austrian healthcare system is shaped at the federal level and by the states, self-governing bodies with a mixed model of financing by state and social health insurance companies. The Federal Ministry of Labour, Social Affairs, Health and Consumer Protection (formerly Ministry of Health) is the highest federal authority in matters related to healthcare. It regulates social health insurers and professional bodies and oversees adherence to the laws introduced to safeguard care [ 2]. Concerning the hospital sector, only the framework legislation is defined at the federal level, the specifics of legislation and implementation being the responsibility of the federal states. ‚Ä¶
Anzeige
Vorheriger Artikel Austrian consensus guidelines on imaging requirements prior to hepatic surgery and during follow-up in patients with malignant hepatic lesions
N√§chster Artikel The Jewish doctors involved in the development of health resorts in eastern Galicia at the late 19th and early 20th century (Central and Eastern Europe) 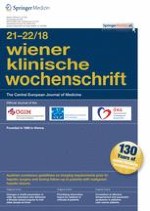