Contact dermatitis is a common skin condition that can have a considerable impact on patient quality of life and function. Historically, contact dermatitis has played a significant role in the evolution of dermatology as the understanding of a relationship between environmental exposure and specific skin disease became more widely accepted. Reports about this relationship can be found throughout the history of humanity, thousands of years ago. The Egyptians were perhaps the first to document this relationship in ancient history, and documentation has also been found in several other cultures and nations such as the Chinese, Indians, Europeans, and American colonizers. The patch test emerged over a century ago and has remained a powerful tool for diagnosing and directing patients. This paper provides historical and curious facts about contact dermatitis.
Anzeige
Vorheriger Artikel The history of medicine
Nächster Artikel Body dysmorphic disorder: history and curiosities 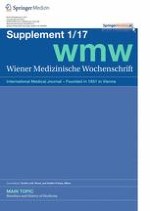 Psychoneurocutaneous medicine: past, present and future

The history of Botulinum toxin: from poison to beauty