The surgical management of perforated sigmoid diverticulitis (PSD) is controversial and challenging. Hartmann’s procedure (HP) still remains the most frequently performed procedure for diffuse peritonitis. However, because less than 50% of patients never achieve restored bowel continuity, alternative surgical procedures have been proposed, including laparoscopic lavage and resection with primary anastomosis (PRA), with or without a covering ileostomy. We performed a retrospective study to compare HP vs. PRA with loop-ileostomy for the treatment of PSD with generalized peritonitis.

Data from 194 patients operated on for PSD from January 2008 to December 2018 were analyzed. Patients were classified into two groups: PRA and HP, according to the surgical procedure performed.

Primary anastomosis can be performed safely without adding morbidity and mortality in cases of generalized diverticular peritonitis. Hartmann’s procedure should be reserved only for hemodynamically unstable or high-risk patients. 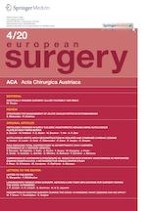 Letter to the editor

Laparoscopic versus open surgery: aerosols and their implications for surgery during the COVID-19 pandemic

Strategies for management of acute cholecystitis in octogenarians