Viral or bacterial upper respiratory infections are the most common cause of acute exacerbation of chronic obstructive pulmonary disease (AECOPD). Based on available data, no reliable parameter has been presented to distinguish between bacterial and nonbacterial exacerbations. Therefore, we compared the diagnostic value of procalcitonin (PCT) level, which is a newer marker for predicting bacterial infections in patients with AECOPD, to routine parameters such as C-reactive protein (CRP) levels and the neutrophil/lymphocyte (N/L) ratio.

This study included all consecutive patients who were admitted for a diagnosis of AECOPD between January 1 and March 31, 2014. PCT, CRP, and the N/L ratio were assessed in addition to cultures from tracheal aspirates or sputum on the first day of admission. Patients with a pneumonic infiltration on chest radiographs, or an extrapulmonary infection focus, or whose blood samples were not obtained for PCT and/or CRP at the same time as sputum culture were excluded from the study.

A total of 77 patients were included with a mean age of 71.7 ± 9.5 years. Bacteria were isolated in 37.4 % of the patients. Mean PCT levels were significantly higher in patients with positive sputum cultures than in patients with negative sputum cultures. The cut-off values for PCT, CRP, and the N/L ratio for predicting a bacterial infection were 0.40 ng/mL, 91.50 mg/L, and 11.5, respectively; sensitivity was 61, 54, and 61 % respectively; specificity was 67, 52, and 58 %, respectively; and the area under the curve (AUC) values were 0.64, 0.52, and 0.58, respectively. The AUC value of PCT was significantly better for predicting bacterial infection compared with the CRP level or the N/L ratio (p = 0.042).

PCT was better than CRP and the N/L ratio for predicting a bacterial infection in hospitalized patients with AECOPD. However, we find PCT not so reliable in predicting bacterial infection in AECOPD due to sensitivity and specificity of less than 80 % and a low AUC value.
Anzeige
Vorheriger Artikel Feasibility, acceptance and long-term exercise behaviour in cancer patients: an exercise intervention by using a swinging-ring system
Nächster Artikel Impact of elevated serum estradiol/free testosterone ratio on male varicose veins in a prospective study 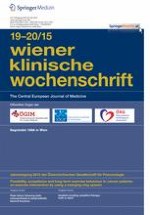