A prospective, noninterventional survey was conducted among Clostridium difficile positive patients identified in the time period of July until October 2012 in 18 hospitals distributed across all nine Austrian provinces. Participating hospitals were asked to send stool samples or isolates from ten successive patients with C.difficile infection to the National Clostridium difficile Reference Laboratory at the Austrian Agency for Health and Food Safety for PCR-ribotyping and in vitro susceptibility testing. A total of 171 eligible patients were identified, including 73 patients with toxin-positive stool specimens and 98 patients from which C. difficile isolates were provided. Of the 159 patients with known age, 127 (74.3 %) were 65 years or older, the median age was 76 years (range: 9–97 years), and the male to female ratio 2.2. Among these patients, 73 % had health care-associated and 20 % community-acquired C. difficile infection (indeterminable 7 %). The all-cause, 30-day mortality was 8.8 % (15/171). Stool samples yielded 46 different PCR-ribotypes, of which ribotypes 027 (20 %), 014 (15.8 %), 053 (10.5 %), 078 (5.3 %), and 002 (4.7 %) were the five most prevalent. Ribotype 027 was found only in the provinces Vienna, Burgenland, and Lower Austria. Severe outcome of C. difficile infection was found to be associated with ribotype 053 (prevalence ratio: 3.04; 95 % CI: 1.24, 7.44), not with the so-called hypervirulent ribotypes 027 and 078. All 027 and 053 isolates exhibited in vitro resistance against moxifloxacin. Fluoroquinolone use in the health care setting must be considered as a factor favoring the spread of these fluoroquinolone resistant C. difficile clones. 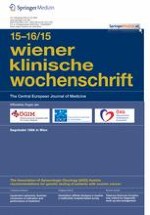