Medullary carcinoma (MC) is a rare tumor with a solid growth pattern without glandular differentiation and constitutes less than 1% of colorectal cancers. Lymph node positivity and distant organ metastasis were reported to be lower than in other poorly differentiated adenocarcinomas. Therefore, the diagnosis of MC is pathologically important in terms of follow-up and treatment. We aimed to investigate the characteristics of medullary cancer in our case series.

427 patients with colorectal cancer (CRC) who underwent surgery between January 2011 and December 2017 were evaluated retrospectively in 2 groups as MC (n = 13) and non-MC (n = 414) in terms of demographic characteristics, pathological data, and oncological outcomes.

MC is commonly localized in the right colon, has a large tumor size, and is mostly diagnosed in the T4 stage. As MC most likely have defects in DNA MMR, correct pathological diagnosis is important for postoperative treatment and the prognosis of the patients. 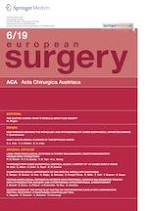 Quantification of the effects of coffee on postoperative ileus after laparoscopic ventral rectopexy: a randomized controlled trial

The gastric cardia: what it reveals about our society