Vaginal dryness and associated symptoms may occur in women of any age and are a frequent burden after menopause. The North American Menopause Society recommends long-acting non-hormonal vaginal creams as first-line therapy. A new type of such creams was developed (Remifemin® FeuchtCreme in Austria and Germany). This hormone-free cream contains hamamelis virginiana distillate and well-established vaginal cream ingredients. We explored its physical function and tolerability in an open interventional clinical trial. 20 postmenopausal women (54 to 76 years, median 60) treated their vaginal dryness using this cream once daily for 7 days and reported about their symptoms before, 4 to 8 h after first and 14 to 22 h after last application. A physician assessed tolerability and local physical function. All patients completed the study. Local physical function significantly improved from dryness at baseline (mean 4.0 ± SD 1.8) to a normal moisture level, on average (6.3 ± 2.1 after first, 6.7 ± 2.1 after last application, p = 0.0001). Subjective assessment of a feeling vaginal dryness showed a significant improvement at both times (p = 0.0001). Onset and duration of feeling moisturized were reported to be 0 to 2 min and 11.3 ± 6.9 h after application. All women reported vaginal dryness at baseline. 55 and 80% of patients reported no dryness after first application and at the end of the investigation. The cream was seen at the application site for up to 21 h. Tolerability assessments did not reveal any relevant change over time. There were four adverse events in 4 patients, all not serious and of mild intensity: urinary urgency (2), diarrhoea (1) and mild spotting after first application (1). The latter was caused by the dry surface of the applicator and was avoided by moisturizing the surface of the applicator at subsequent applications. In conclusion, these study results indicate a well-tolerated and long-acting function of this new vaginal moisturizing cream. Further clinical research in more patients will follow. 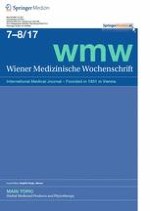 Modulation of gastrointestinal motility beyond metoclopramide and domperidone

Mechanisms on spasmolytic and anti-inflammatory effects of a herbal medicinal product consisting of myrrh, chamomile flower, and coffee charcoal