Dr. H. Flick:
A 33-year-old psychologist complained of palpitations and the feeling of tightness in her chest, dyspnea on exertion (and sometimes even dyspnea at rest) since 1 week ago. She has been taking hormonal therapy (progesterone/lynestrenol) because of endometriosis for the last 2 years. Her pulmonologist referred her to the emergency room (ER) of Graz University Medical Center because of rapidly progressive dyspnea and suspected pulmonary embolism. A mass had been detected in the retroperitoneum and biopsied in a hospital in another state 2 months prior to admission. Results of the biopsy were not available. Physical examination on admission was unremarkable except for complete dullness over the right lung on percussion. Blood pressure was 120/80 mm Hg, heart rate (HR) 138 beats per minute (bpm), temperature 36.0 °C, oxygen saturation at ambient air 95%. Electrocardiogram showed sinus tachycardia (HR 117 bpm), S1Q3 type, and P waves and PQ interval were unremarkable. Transthoracic echocardiography revealed normal aortic, mitral and tricuspid valves. The pulmonic valve was not assessable, tricuspid annular plane systolic excursion was reduced at 0.8 cm. When moving the sonography sensor to the abdomen, no ascites was seen. Laboratory tests: leukocytes 15.36 × 10^9/L (normal: 4.4–11.3 × 10^9/L), hemoglobin 16.8 g/dL (normal: 12–15.3 g/dL), hematocrit 50.3% (normal: 35–45%), gamma-glutamyl transferase 63 U/L (normal: <38 U/L), C‑reactive protein (CRP) 7.5 mg/L (normal: <5.0 mg/dL), D‑dimer 2.18 mg/L (normal: <0.5 mg/L).
X-ray and computed tomography (CT) of the chest revealed a massive pleural effusion on the right side. Immediate paracentesis in the ER yielded 1 L of a white turbid effusion. Detailed analysis see Table 1.
Table 1
Laboratory analysis of the patient’s milky pleural effusion
aOr presence of chylomicrons
Anzeige
A diagnostic test was performed and specific treatment was initiated.
Dr. M. Fuchsjäger:
The patient’s chest X‑ray showed subtotal opacity of the right lung with merely a residual ventilation of the right upper lobe and a mediastinal shift to the left (Fig. 1). Subsequent CT of the chest showed a massive right pleural effusion with subtotal atelectasis of the right lung and a marked mediastinal shift to the left. Multiple small lung cysts with a diameter of up to 6 mm as well as extensive ground glass opacities were seen in the left lung. There was no evidence of pulmonary embolism or enlargement of lymph nodes (Fig. 2).
×
×

Information on Clinical-Pathological Conferences from the Medical University of Graz are also available under https://​www.​medunigraz.​at/​cpc-klinisch-pathologischekon​ferenz/​ (in German).

P.K. Bauer, M. Flicker, E. Fabian, H. Flick, L. Brcic, B. Liegl-Atzwanger, M. Janisch, M. Fuchsjäger, H. Olschewski and G.J. Krejs declare that they have no competing interests.
Open Access This article is licensed under a Creative Commons Attribution 4.0 International License, which permits use, sharing, adaptation, distribution and reproduction in any medium or format, as long as you give appropriate credit to the original author(s) and the source, provide a link to the Creative Commons licence, and indicate if changes were made. The images or other third party material in this article are included in the article’s Creative Commons licence, unless indicated otherwise in a credit line to the material. If material is not included in the article’s Creative Commons licence and your intended use is not permitted by statutory regulation or exceeds the permitted use, you will need to obtain permission directly from the copyright holder. To view a copy of this licence, visit http://​creativecommons.​org/​licenses/​by/​4.​0/​. 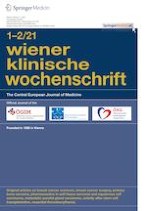 Effects of a structured exercise program on physical performance and function, quality of life and work ability of physically active breast cancer survivors