Dr. D. Schiller:
During the preceding 4 weeks the patient noticed progressive weakening in all four extremities, first in the upper extremities and the shoulder girdle and then in the lower extremities, causing three falls during the 2 days before admission on Easter Sunday, when tetraparesis was diagnosed in the emergency room. On admission the patient (height 161 cm, weight 71 kg) was alert, oriented and afebrile. Muscle strength was graded 1–2 (grade 0 = total paralysis, grade 5 = normal muscle contraction against full resistance) in all four extremities. Sensory function was normal in all extremities and cranial nerve function was unremarkable. Blood pressure was 180/100 mmHg with a regular pulse of 88 beats per minute. The rest of the physical examination was normal. The patient denied double vision, dysphagia and dysarthria, myalgia, dysuria, dyschezia and recent trauma (except for the three falls shortly before admission), but she had experienced polyuria for the last 2 years. Arterial hypertension had been diagnosed 4 years previously and treated with carvedilol 25 mg and ramipril/hydrochlorothiazide 5/25 mg q.d. Electrocardiography showed sinus rhythm with normal P waves and QRS complexes but clearly flattened T waves in the presence of U waves. Magnetic resonance imaging (MRI) of the brain, the cervical spine and the medulla was normal. Cerebrospinal fluid analysis did not show pleocytosis or increased protein concentration. Further laboratory results: normal red and white blood cell counts except for neutrophilic granulocytosis (16.8 g/l), sodium 144 mmol/l (normal: 132–145 mmol/l), potassium 1.5 mmol/l (normal: 3.5–5.5 mmol/l), creatinine 0.9 mg/dl (normal: 0.5–0.9 mg/dl), aspartate aminotransferase (AST) 311 U/l (normal: 15–37 U/l), alanine aminotransferase (ALT) 121 U/l (normal: 12–34 U/l), creatine kinase (CK) 11,788 U/l (normal: <145 U/l), plasmatic coagulation parameters and markers of inflammation were all within normal limits.
A panel of diagnostic tests was performed.
Anzeige

Dr. A. Tomaschitz:
When a patient presents with tetraparesis, the physician might primarily suspect a neurological cause or a neurodegenerative disease, such as neurosarcoidosis. Rheumatologic diseases and infections involving the central nervous system (CNS), e.g. human immunodeficiency virus infection, cytomegalovirus infection or tuberculosis would be further considerations. As, however, there is no evidence that any of these apply to our patient, the outstanding laboratory findings of hypokalemia (1.5 mmol/l, normal: 3.5–5.5 mmol/l) and rhabdomyolysis (CK 11,788 U/l, normal: <145 U/l), should be addressed. Typical endocrine conditions presenting with hypokalemia and rhabdomyolysis resulting in tetraparesis include (1) thyrotoxicosis, i.e. thyrotoxic periodic paralysis, which is a rare clinical manifestation of hyperthyroidism and presents with sudden onset of paralysis associated with severe hypokalemia, (2) Cushing syndrome, i.e. hypokalemia due to increased renal potassium excretion caused by the mineralocorticoid effects of cortisol and (3) massive intake of glucocorticoids, which very rarely results in hypokalemic paralysis.
In this hypertensive patient, hyperaldosteronism (primary aldosteronism) should also be considered. Primary aldosteronism is defined as inappropriately high and (relatively or absolutely) autonomous aldosterone secretion, which is not adequately suppressed by sodium loading [1]. The clinical features of primary aldosteronism are caused by hypersecretion of aldosterone and increased activation of the mineralocorticoid receptor (MR) in the distal nephron. Importantly, the MR is additionally expressed in a variety of epithelial and non-epithelial extrarenal tissues, such as endothelial cells, vascular smooth muscle cells, cardiac myocytes, endothelial progenitor cells and neutrophils [2]. Both (1) the increased aldosterone-MR mediated renal effects (leading to moderate sodium and water retention and excessive potassium excretion) and (2) aldosterone-MR and direct aldosterone mediated (MR-independent and non-genomic) vascular effects (contributing to e.g. vascular stiffening and endothelial dysfunction) result in arterial hypertension and, variably, hypokalemia [3‐5]. Only 9–37 % of patients with primary aldosteronism present with hypokalemia, so that it is not essential for diagnosing aldosterone excess [6]. In severe cases of primary aldosteronism, hypokalemia may be expressed as muscle weakness, particularly in the lower extremities, muscle spasms, palpitations and, rarely, hypokalemic paralysis [7], which might indeed be responsible for our patient’s tetraparesis.
Primary aldosteronism is the most common curable form of arterial hypertension and is reported in approximately 5–10 % of hypertensive patients and in approximately 20 % of those with documented treatment-resistant hypertension [8, 9]. Our patient is young and has a medical history of hypertension obviously resistant to antihypertensive drugs, both of which are important diagnostic clues for primary aldosteronism. In primary aldosteronism, younger hypertensive patients often respond poorly to angiotensin-converting enzyme inhibitors, angiotensin receptor blockers, calcium channel blockers and beta-blockers [10]. The use of different drugs, as in the discussed case, suggests primary aldosteronism.
Due to increased renal loss of H+ ions, alkalosis is often observed in primary aldosteronism and hypokalemia followed by secondary hyperparathyroidism due to the hypercalciuric effects of aldosterone is also a common feature of the disease. Unfortunately, the protocol does not include any data on the patient’s acid-base balance and serum calcium levels.
Anzeige
Taken together, severe hypokalemia and hypokalemic paralysis in a young patient with a medical history of treatment-resistant hypertension strongly suggest the diagnosis of primary aldosteronism. As the family history was negative for primary aldosteronism in this case, sporadic forms, i. e. idiopathic unilateral or bilateral adrenal hyperplasia and aldosterone-producing adenomas (Conn syndrome), which is the more severe variant of primary aldosteronism, have to be considered. For biochemical confirmation of the clinical suspicion of primary aldosteronism, the aldosterone to renin ratio (ARR) would have to be determined.

Hypokalemic paralysis due to primary aldosteronism, most likely Conn syndrome.

The authors express their sincere gratitude to Eugenia Lamont for language editing of the manuscript.
Open access funding provided by Medical University of Graz. 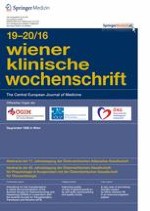 Improving quality of care in general practices by self-audit, benchmarking and quality circles