Dr. D. Schiller
After two previous hospitalizations, an 82-year-old woman was readmitted with chronic diarrhea of 8-month duration and weight loss of 20 kg. This had left her so weak that she could no longer look after herself.
The watery diarrhea had started 8 months before and sometimes was worse at night. She had up to 12 bowel movements per day without abdominal pain and had lost her appetite. Duodenal biopsies revealed subtotal villous atrophy with crypt hyperplasia and increased intraepithelial lymphocytes (40 per 100 epithelial cells). Tissue transglutaminase antibodies and serum anti-endomysial antibodies were negative. Serum immunoglobulins (IgG, IgA, and IgM), thyroid stimulating hormone (TSH), differential blood count, anti-HIV antibody, ova and parasites in stool (three times), colonoscopy with multiple biopsies, capsule endoscopy of the small bowel, and abdominal computerized tomography were all negative or normal. Biopsies from ileoscopy showed changes similar to the proximal small bowel. Human leukocyte antigen (HLA)-DQ2 (positive) and DQ8 (negative) genotyping were compatible with celiac disease. Intestinal lymphocytes showed no T-cell receptor rearrangement. A strict gluten-free diet did not ameliorate the diarrhea but it improved slightly under budesonide medication. Finally, during this third hospitalization, a diagnosis of “refractory sero-negative celiac disease” was established.
Anzeige
Her medical history was positive for paroxysmal atrial fibrillation, hypertension, hypothyroidism following autoimmune thyreoiditis and chronic depression. Her history was negative for previous gastrointestinal complaints, foreign travel, and fever. Her family history was non-revealing.
Her medications included budesonide, amiodarone, olmesartan, amlodipine, thyroid replacement therapy (levothyroxine, liothyronine), trazodone, risperidone, and lorazepam.
On admission the patient was afebrile, body weight was 45 kg, height 162 cm; she was in poor general and nutritional condition (body mass index: 17.1 kg/m2). Blood pressure was 135/90 mmHg, bowel sounds were hyperactive. She appeared slightly dehydrated. Abnormal laboratory results included serum potassium 3.3 mmol/l (normal: 3.6–4.8 mmol/l), C-reactive protein (CRP) 1.5 mg/l (normal:  < 0.5 mg/l), and hemoglobin 11.1 g/dl (normal: 13.0–17.5 g/dl). All other results were negative or normal including urine dip stick, fecal occult blood, and calprotectin.
A diagnostic insight allowed an explanation for the severe diarrhea.
Anzeige
Dr. C. Lackner
Histological examination of the duodenal biopsies mentioned in the protocol revealed subtotal villous atrophy, chronic inflammation of the lamina propria and increased intraepithelial lymphocytes (approximately 40 per 100 epithelial cells), reactive and degenerative epithelial changes as well as crypt hyperplasia (Fig. 1). These histopathological features are not very specific and can be found with celiac disease, Crohn’s disease, enteric infection, collagenous sprue, tropical sprue, bacterial overgrowth, common variable immunodeficiency, autoimmune enteropathy, and hematological malignancies, and have also been reported as side effects of immunosuppressant drugs [1, 2]. In this case, small bowel histology is compatible with a wide spectrum of diseases.
×

Hypokalemia is always a sign of chronic large-volume diarrhea. The transport mechanisms in the colon try to conserve sodium but potassium has to go into the lumen in exchange. With a normal stool, 5 meq of potassium are discharged every day; with a liter of watery stool there is a potassium loss of 50 meq/l per day [43‐45]. This slowly depletes total body potassium (50 meq/kg) and ultimately results in hypokalemia. Hypokalemia is prominent in pancreatic cholera or Verner–Morrison syndrome, where it is part of the name of the condition (WDHH syndrome or watery diarrhea hypochlorhydria hypokalemia syndrome) [46]. It is also observed with chronic laxative abuse. That the patient had slight hypokalemia indicates long-standing large-volume diarrhea.
This case is very interesting and emphasizes the diagnostic dilemma when patients with villous atrophy have either negative celiac serology or do not respond to a gluten-free diet. Under these circumstances, a broad spectrum of other etiologies for enteropathy has to be considered. A side effect of medication as a cause, especially when olmesartan is involved, should be part of the initial differential diagnosis of such unexplained enteropathy, as the newer guidelines now suggest [18, 47]. 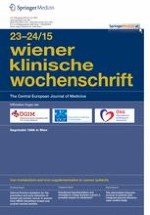 Is it possible to use transaminases for deciding on surgical or non-operative treatment for blunt liver trauma?