Data of pediatric patients with active TB infections, who were hospitalized for further investigations or isolation precautions between 2010 and 2016 at the Wilhelminenspital, Austria’s reference center for childhood tuberculosis, were retrospectively analyzed. Demographic and clinical data (symptoms, microbiology, radiology, immunology) were collected, compared and evaluated.

A total of 127 patients with active tuberculosis were included in the study. The number of admissions varied between n = 7 in 2010 and n = 26 in 2016. There were two age peaks of infected children (0–5 years: n = 41 and 15–18 years: n = 45). In 35% of the cases one parent had active TB and was suspected to be the index case. In 36% the source of infection remained unknown. Compared to young children (<5 years), adolescents (15–18 years) showed proportionally more TB-related symptoms, such as cough (41% vs. 24%), fever (15% vs. 14%) and weight loss (22% vs. 0%). At the time of admission 51% of the young children and 33% of the adolescents were free of symptoms. Intrathoracic disease was found in 80.8%, extrathoracic disease in 19.2% and 11% of the cases were tuberculous lymphadenitis. Of the patients with intrathoracic TB 54% (n = 64) had a positive microbiological result (auramine staining, bacteriological culture, PCR). In young children hilar lymphadenopathy was the most frequent radiological finding (50%), whereas in adolescents lung infiltrates were most common (36%). The sensitivity of interferon-gamma release assays (IGRA) was 0.94 compared to 0.88 of the tuberculin skin test (TST). Both test methods showed moderate concordance (ϕ-coefficient = 0.48).

A high number of asymptomatic children and adolescents with active TB were observed, which underlines the importance of efficient screening measures. Thorough history taking in all patients with TB is essential to maximize the effect of contact tracing. Overall, infection rates remained consistently low during the observation period. 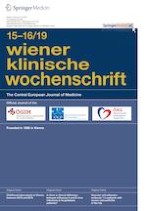 Fine and ultrafine particle exposure during commuting by subway in Vienna