Widely varying mortality rates of critically ill Coronavirus disease 19 (COVID-19) patients in the world highlighted the need for local surveillance of baseline characteristics, treatment strategies and outcome. We compared two periods of the COVID-19 pandemic to identify important differences in characteristics and therapeutic measures and their influence on the outcome of critically ill COVID-19 patients.

This multicenter prospective register study included all patients with a SARS-CoV‑2 infection confirmed by polymerase chain reaction, who were treated in 1 of the 12 intensive care units (ICU) from 8 hospitals in Tyrol, Austria during 2 defined periods (1 February 2020 until 17 July: first wave and 18 July 2020 until 22 February 2021: second wave) of the COVID-19 pandemic.

Advanced treatment strategies and learning effects over time resulted in reduced rates of mechanical ventilation and vasopressor use in the second wave associated with shorter ICU length of stay. Despite these improvements, age appears to be a dominant factor for hospital mortality in critically ill COVID-19 patients.
Begleitmaterial
List of COVID-19 ICUs in Tyrol, Supplemental Tables 1–11, Supplemental Figure 1
Hinweise

As of May 2021, more than 600,000 patients tested positive and around 10,000 deaths are attributed to Coronavirus disease 19 (COVID-19) in Austria [1]. While in the beginning of the pandemic the number of SARS-CoV‑2 positive patients requiring intensive care was unknown, the rate settled at around 1–2% during the second period [2].
Due to numerous influencing factors different cohorts from various areas have demonstrated widely varying mortality rates and characteristics of intensive care unit (ICU) patients. A meta-analysis published in June 2020 found ICU mortality rates ranging from 14–84% [3], which has shown the importance of observing regional conditions separately in order to have a better understanding of major factors influencing outcome [4].
Anzeige
Since the beginning of the COVID-19 pandemic, countless studies about therapeutic strategies and the management of ICU patients have been initiated and published [5, 6]. With the RECOVERY trial corticosteroid treatment has shown a mortality benefit in patients requiring respiratory support and has changed therapeutic strategies for critically ill COVID-19 patients. Guidelines have been continuously updated, adapting recommendations based on the best available evidence.
In Tyrol, Austria, comprising 750,000 inhabitants we established the Tyrolean COVID-19 intensive care registry (Tyrol-CoV-ICU-Reg) at the beginning of the first surge of the pandemic in March 2020. Characteristics and outcomes of the first period have previously been published [4]. Since then, we continued the registry throughout the second period of the COVID-19 crisis.
We assumed that the rapid growth in knowledge as well as the dynamic of the ongoing pandemic may result in different and changing patient characteristics and outcomes of critically ill patients over time. Therefore, the aim of this study was to evaluate critically ill patients with COVID-19, treated in any of the 12 ICUs dedicated to COVID-19 in Tyrol, Austria and to identify important changes between the two waves in baseline characteristics, treatment strategies and outcomes.

The Tyrol-CoV-ICU-Reg is a multicenter prospective register study and collects data from 13 ICUs (8 hospitals, list of all ICUs in the electronic supplementary material, ESM) providing critical care for COVID-19 patients in Tyrol. Methods and study design have been published previously [4].
Anzeige
Patients with a SARS-CoV‑2 infection confirmed by polymerase chain reaction (PCR) and admitted to an ICU or intermediate care unit in Tyrol (Austria) from 1 February 2020 until 22 February 2021 were included in this analysis. Patients under 18 years of age have been excluded from the main analysis and are reported separately in the ESM (Tables S1–3).
A total of 13 ICUs (from 8 hospitals in the region of Tyrol, Austria) including the University Hospital of Innsbruck with up to 5 parallel ICUs provided data for the Tyrol-CoV-ICU-Reg. For this study, multiple hospitalizations of patients in different ICUs were combined.
This registry was approved by the local ethics committee (Nr. 1099/2020).

For comparison of the different periods of the pandemic two waves were defined for the analysis. According to the rise and fall of active cases of ICU patients in Tyrol (Austria) during the past year (Fig. 1), the two periods were set from 1 February 2020 until 17 July 2020 (first wave) and from 18 July 2020 until 22 February 2021 (second wave). The cohort of the first wave has already been reported in detail [4] and is described again in this manuscript for reasons of comparison.
×
Data for the second period of this registry were collected via electronic case report forms using REDCap electronic data capture tools hosted at the Department for Medical Statistics, Informatics and Health Economics, Medical University Innsbruck [7, 8].
The collected baseline characteristics were age, sex, weight, height, glycated hemoglobin (HbA1c), comorbidities, smoking habits, date of symptom onset, location before admission, date of hospital and ICU admission, Simplified Acute Physiology Score (SAPS) III and Sequential Organ Failure Assessment (SOFA) score at admission.
During the ICU stay, COVID-19 typical radiological alterations (x-ray or computed tomography), respiratory support and therapies (high flow nasal cannula, HFNC, noninvasive ventilation, NIV, mechanical ventilation, prone positioning and use of neuromuscular blockade), acute kidney injury (AKI) as well as renal replacement therapy (RRT), extracorporeal membrane oxygenation (ECMO), corticosteroids and changes in the therapy goal were recorded.
Patients were followed until death or hospital discharge, whichever occurred earlier.
Anzeige
The AKI was defined and staged according to the Kidney Disease: Improving Global Outcome (KDIGO) criteria [9].

Baseline characteristics are presented in Table 1. In total 512 critically ill patients were admitted to 1 of the 13 study ICUs (5 ICUs at central university hospital, 7 ICUs from regional hospitals and 1 pediatric ICU at the central university hospital) from 9 March 2020 until 22 February 2021. Four patients were not included in main analysis due to age < 18 years and are reported in the ESM Tables S1–3.
Table 1
Baseline characteristics of 508 critically ill COVID-19 patients stratified by two waves [4]
The 107 patients from the first wave have been previously reported [4].
IQR interquartile range, DM diabetes mellitus, COPD chronic obstructive pulmonary disease, BMI body mass index, HbA1c glycated hemoglobin, SOFA sequential organ failure assessment, SAPS simplified acute physiology score, ICU intensive care unit
The majority presented during the second period (n = 401/508). All patients had SARS-CoV‑2 infection confirmed by polymerase chain reaction (PCR). The overall median age was 71 years (IQR 60–78 years) and the majority of patients were male (n = 356, 70.1%). At admission median SAPS III score and median SOFA score were 56 (IQR 49–64) and 5 (IQR 4–8), respectively. COVID-19 was the primary reason for hospital admission in 83.1% (n = 422) of the patients, 92% (n = 458) showed typical radiological changes in the chest x‑ray and 87.7% (n = 256) in the computed tomography during the ICU stay. The median time from symptom onset to hospital and ICU admission was 6 days (IQR 3–9days) and 8 days (IQR 5–11 days), respectively.
Anzeige
The median body mass index (BMI) was 27.52 (IQR 24.98–30.86) and 30.6% (n = 150) of all patients had a BMI greater than 30.
Patients were significantly older in the second period (64 years, IQR 54–74 years vs. 72 years, IQR 62–78 years, p < 0.001, Fig. 2).
×
The most common comorbidities were hypertension, cardiovascular diseases, diabetes mellitus and renal comorbidities and were relatively similar in both periods. The same applies to other baseline characteristics and risk factors (Table 1).

Overall ICU and hospital mortality was 27.4% (n = 139) and 31.1%, respectively (n = 158, Table 3). Critically ill patients, who died in hospital were significantly older (77 years, IQR 71–81 years vs. 66 years, IQR 57–75 years, p < 0.001, Fig. 2). The overall number of comorbidities was also significantly higher in patients who died in hospital (ESM Table S7). The times from symptom onset to hospital (5 days, IQR 3–8 days vs. 7 days, IQR 4–10 days, p < 0.001) and ICU admission (7 days,IQR 4–10 days vs. 9 days, IQR 6–12 days, p = 0.001) were significantly shorter and rates of IMV (68.2% [n = 107] vs. 47.7% [n = 167], p < 0.001), prone positioning (58.9% [n = 93] vs. 40.4% [n = 141], p < 0.001) and vasopressor use (75.5% [n = 117] vs. 44.9% [n = 157], p < 0.001) were significantly higher in hospital nonsurvivors (ESM Tables S7–S9).
Table 3
Outcome of 508 critically ill COVID-19 patients stratified by two waves [4]
The 107 patients from the first wave have been previously reported [4].
IQR interquartile range, ICU intensive care unit, AKI acute kidney injury, KDIGO kidney disease: improving global outcomes, LOS length of stay, CPR cardiopulmonary resuscitation, IMV invasive mechanical ventilation, ECMO extracorporeal membrane oxygenation
As illustrated by the Kaplan-Meier analysis, a higher age (> 71 years) was significantly associated with impaired outcome (Fig. 4).
×
To further assess clinically relevant predictors of hospital mortality, we included age, sex, period of presentation, the number of comorbidities, smoking habits, frailty, if patients came from a nursing home and the time from symptom onset to ICU admission in a logistic regression analysis. Age, the number of comorbidities and the frailty remained significant predictors of hospital mortality after adjustment for other baseline characteristics in the multivariate model (Table 4).
Table 4
Logistic regression analysis for prediction of hospital mortality
OR odds ratio, CI confidence interval, ICU intensive care unit
The ICU mortality did not change significantly between the two periods; however, in the first period, hospital mortality was significantly lower (Table 3). Patients stayed longer in the hospital (27 day, IQR 15–42 days vs. 20 days, IQR 13–34 days, p = 0.012) and in the ICU (18 days, IQR 5–32 days vs. 10 days, IQR 5–18 days, p < 0.001) than in the second period. The rate of patients with a documented treatment limitation was relatively similar during both periods (24.3% [n = 26] vs. 27.7% [n = 111], p = 0.563). After 1:1 propensity score matching, a better balance of baseline characteristics was established (Supplemental Table 11). While in univariate analysis there was a significant association between the period of presentation and hospital mortality, no significance was found in the analysis of the matched cohort (Supplemental Table 12).

Therapeutic strategies for patients with COVID-19 at the ICU improved over time, which lead to a reduction of IMV, AKI and RRT and subsequently to a reduced ICU LOS in the second period. Age is an important predictor of hospital mortality, with a strong influence on outcomes of critically ill COVID-19 patients.

We want to express our gratitude to Lalit Kaltenbach for providing support for the REDCAP platform. Furthermore, we would like to thank all healthcare workers, who helped in the treatment of COVID-19 patients in Tyrol, Austria.

This study was funded by a grant from the Tyrolean Government.

T. Mayerhöfer, S. J. Klein, A. Peer, F. Perschinka, G. F. Lehner, J. Hasslacher, R. Bellmann, L. Gasteiger, M. Mittermayr, S. Eschertzhuber, S. Mathis, A. Fiala, D. Fries, A. Kalenka, E. Foidl, W. Hasibeder, R. Helbok, L. Kirchmair, B. Stögermüller, C. Krismer, T. Heiner, E. Ladner, C. Thomé, C. Preuß-Hernandez, A. Mayr, A. Pechlaner, M. Potocnik, B. Reitter, J. Brunner, S. Zagitzer-Hofer, A. Ribitsch and M. Joannidis declare that they have no competing interests.
Open Access This article is licensed under a Creative Commons Attribution 4.0 International License, which permits use, sharing, adaptation, distribution and reproduction in any medium or format, as long as you give appropriate credit to the original author(s) and the source, provide a link to the Creative Commons licence, and indicate if changes were made. The images or other third party material in this article are included in the article’s Creative Commons licence, unless indicated otherwise in a credit line to the material. If material is not included in the article’s Creative Commons licence and your intended use is not permitted by statutory regulation or exceeds the permitted use, you will need to obtain permission directly from the copyright holder. To view a copy of this licence, visit http://​creativecommons.​org/​licenses/​by/​4.​0/​. 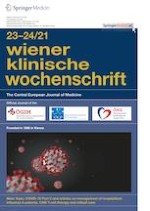 Prevalence of SARS-CoV-2 antibodies in healthy blood donors from the state of Tyrol, Austria, in summer 2020

Management of hospitalized influenza A patients during the season 2018/19