Challenging situations in cholecystectomy and strategies to overcome them | springermedizin.at Skip to main content
SUCHE MENÜ 1 2 3 4

Cholecystectomy may be difficult and hazardous, causing major morbidity and mortality. This review aims to identify situations increasing the probability of difficult gallbladders and present today’s best practice to overcome them.

One in six gallbladders is expected to be a difficult cholecystectomy. The majority can be predicted by patient history, clinical symptoms, and pre-existing comorbidities. Acute cholecystitis, mild biliary pancreatitis, prior endoscopic sphincterotomy, and liver cirrhosis are the predominant underlying diseases. Early or delayed cholecystectomy, percutaneous cholecystostomy, and pure conservative treatment are evidence-based options. Early laparoscopic cholecystectomy is of advantage in patients fit for surgery, with subtotal cholecystectomy or conversion to open surgery as bail-out strategies. The choice of the procedure depends on the experience of the surgeon.

Clinical decisions should follow a pathway based on patients’ risk, favoring laparoscopic cholecystectomy whenever possible. The implementation of an institutional pathway to deal with difficult gallbladders is recommended.
Hinweise

Springer Nature remains neutral with regard to jurisdictional claims in published maps and institutional affiliations.
Laparoscopic cholecystectomy is the gold standard in the treatment of symptomatic cholecystolithiasis. It is one of the most frequently performed procedures in visceral surgery and a benchmark in teaching young surgeons at the beginning of their residency. In the predominant majority, cholecystectomy is a straightforward procedure and the classic model of laparoscopic surgery with low morbidity, short hospitalization, and quick reconvalescence. However, in distinct patients, cholecystectomy represents a life-threatening operation, sometimes forcing experienced surgeons to meet their technical limits. Perioperative mortality for a difficult gallbladder is as high as 11.5% for open and 2.9% for laparoscopic cholecystectomy [1, 2]. Although the problem of the difficult gallbladder is well known in surgical practice and addressed in the literature, the term is not clearly defined and reports lack comparability due to their retrospective design, imprecise or missing definitions, differing patient populations, and individual therapeutic approaches.
This review aims to sum up what is generally understood under the term “difficult gallbladder” and addresses early preoperative recognition, the indication for operation or therapeutic alternatives, surgical techniques, and bail-out strategies to overcome intraoperative problems.
Anzeige

What is a difficult gallbladder?

A challenging cholecystectomy may be predicted in most patients by exploring their medical history. Thus, the evaluation of biliary symptoms and anamnesis, comorbidities, and current medication are crucial. Acute cholecystitis, biliary pancreatitis, prior endoscopic sphincterotomy for clearance of bile duct stones, liver cirrhosis, anticoagulation therapy, morbid obesity, or prior major open surgery of the upper abdomen are strong indicators that cholecystectomy may become difficult. Rarely, problems may be recognized only intraoperatively for several reasons. Examples could be a shrunk gallbladder after chronic cholecystitis, local situations with unclear anatomy in Calot’s triangle, or undiagnosed liver cirrhosis.
Generally, the preoperative diagnostic workup is not different from routine cholecystectomy with physical examination of the abdomen, laboratory tests, and ultrasound of the upper abdomen. If indicated, CT, MR including MRCP, endoscopic ultrasound, and ERCP complete the initial examination.

A correct indication is a cornerstone in surgery. This is especially important if a difficult cholecystectomy is predictable. In concrete terms, the indication for cholecystectomy has to be critically challenged on an individual basis if risk factors are identified. Items to judge are the urgency of cholecystectomy and possibilities to decrease the risk and optimize the patient. As a result, cholecystectomy may be scheduled urgently, as a delayed operation, or even abandoned with conservative treatment initiated. Another important factor to consider are potential alternatives to surgery that could be provided. Especially percutaneous drainage of the gallbladder may be considered for selected patients. Last but not least, in case of an urgent cholecystectomy, the surgeon is asked to choose laparoscopic or primarily open cholecystectomy and to be prepared for bail-out strategies. An overview of decisions to be made is provided in Fig. 1.
×
Anzeige

The number of patients with antithrombotic therapy undergoing surgery is increasing steadily. Preoperatively, this raises the question of whether this therapy should be maintained, adopted, or withdrawn to keep perioperative hemorrhagic complications low. Especially in acute surgery, this problem needs urgent consideration. In general, the incidence of postoperative bleeding complications is determined by the intensity of antithrombotic therapy. In a review of 1075 patients undergoing abdominal laparoscopic surgery, no increase in hemorrhagic complications was found in patients with continued antiplatelet therapy compared to patients with preoperatively suspended or without therapy [25]. A recently published analysis of the effect of antithrombotic therapy in emergency cholecystectomy by the same authors underlines the need of a differentiated approach. Multiple antiplatelet therapy, anticoagulation, male sex, limited performance status, and grade II and III acute cholecystitis were independent risk factors for increased intraoperative blood loss and postoperative bleeding. Single antiplatelet therapy was not associated with hemorrhagic complications [26]. An individual approach balancing each patient’s risk of thrombotic or bleeding complications is therefore crucial.

Morbid obesity seems to be a clear risk factor for a difficult cholecystectomy. Indeed, a recent review on risk factors for conversion of laparoscopic to open cholecystectomy found that 8 of 19 studies analyzing BMI found that conversion was significantly higher in patients with a BMI above 30 kg/m2 [27]. Going into detail, there may be a variety of reasons why the conversion rate is higher according to this review. All of them are technical issues, like the length and positioning of trocars, fatty infiltration of Calot’s triangle, and unclear anatomy. However, it remains unclear whether obesity is really a reason for a difficult cholecystectomy. A retrospective comparison of day-case cholecystectomy in patients with a BMI 30 kg/m2 and obese patients indicated by a BMI above 30 kg/m2 revealed a technically more demanding procedure in the obese group. However, there were no strong indicators for a major impact of obesity. Conversion rates, overall complications, and the incidence of readmission were not markedly different [28].

Surgical techniques for a difficult cholecystectomy

At the beginning of decision-making the question should be whether the gallbladder, in most patients acute cholecystitis, is the leading source of current disease. The severity of acute cholecystitis, time since onset of symptoms, and patients’ comorbidities have to be determined and possibilities for optimizing the patients’ health status checked. Based on this clinical information and additional workup, the decision has to be taken for early operation or conservative therapy, potentially with additional percutaneous gallbladder drainage. Especially in grade II and III acute cholecystitis, this will be an individual decision. An argument for early cholecystectomy is the potential to eliminate the source in one single step, thus keeping the course of the disease short. In contrast, perioperative complications and underestimated comorbidities may hinder postoperative progress. The opposite approach is to keep the intervention at the beginning as minimally traumatic as possible by percutaneous drainage or even pure conservative therapy and postpone more traumatic surgery until the patient is stable. Missing source control with recurrent biliary problems and prolonged hospitalization with an increased risk for secondary medical complications are the drawbacks of this strategy. As there is no approach without cons, an individual patient-centered decision is required. Recommendations from guidelines are of limited value. Especially for moderate acute cholecystitis, the Tokyo guidelines give percutaneous gallbladder drainage a prominent importance that is not consistently confirmed in the literature. There is considerable evidence that early laparoscopic cholecystectomy in moderate acute cholecystitis is feasible with low morbidity and mortality [11]. Provided the surgeon has advanced laparoscopic skills, this also applies for selected patients with severe acute cholecystitis.
There is no high-quality evidence-based recommendation regarding which surgical technique should be chosen. If a cholecystectomy is performed, whether total laparoscopic or primarily open and which bail-out strategies are applied depends on the experience of the surgeon and clinical judgement. The former role of primarily open cholecystectomy as the manifest alternative to laparoscopic cholecystectomy in difficult gallbladders has to be challenged, due to diminished surgical experience with the open procedure [37]. Finally, an individual surgical approach with close workup of complications in interdisciplinary morbidity and mortality rounds is reasonable. Fig. 2 represents a personal strategy for the choice of the type of cholecystectomy and possibilities to bail out.
×
Anzeige

There is no single absolutely verified pathway for how to deal with challenging situations in cholecystectomy. This is due to multiple diseases and factors causing such problems and individual patient risks and demands. Considering these limitations, there is evidence that early cholecystectomy has advantages over delayed surgery. Especially for acute moderate cholecystitis, mild biliary pancreatitis, and cholecystectomy following endoscopic sphincterotomy, this has been proven sufficiently, although the clinical implementation of this evidence in routine surgery needs to be optimized. Interval cholecystectomies should be avoided whenever possible because of their increased operative risks, and percutaneous cholecystostomies reserved for patients absolutely unfit for acute surgery. Bail-out strategies are determined by the experience of the surgeon and the hospital setting. Last but not least, an institutional clinical pathway on how to deal with a challenging cholecystectomy should be implemented.

R. Függer declares that he has no competing interests.
Open Access This article is licensed under a Creative Commons Attribution 4.0 International License, which permits use, sharing, adaptation, distribution and reproduction in any medium or format, as long as you give appropriate credit to the original author(s) and the source, provide a link to the Creative Commons licence, and indicate if changes were made. The images or other third party material in this article are included in the article’s Creative Commons licence, unless indicated otherwise in a credit line to the material. If material is not included in the article’s Creative Commons licence and your intended use is not permitted by statutory regulation or exceeds the permitted use, you will need to obtain permission directly from the copyright holder. To view a copy of this licence, visit http://​creativecommons.​org/​licenses/​by/​4.​0/​. 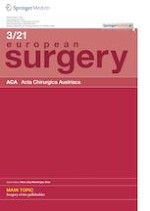 Surgery unites the world: beyond R0 resection of greed, envy and hate.

The “critical view of safety (CVS)” cannot be applied—What to do? Strategies to avoid bile duct injuries

Surgery of the gallbladder