Case numbers in carotid surgery training can be accomplished and are not associated with an inferior outcome. Results of a university based tertiary care center study | springermedizin.at Skip to main content
TOOLBAR 1 2 3 4
SUCHE MENÜ 1 2 3 4

Carotid endarterectomy (CEA) is regarded as a standard procedure in vascular surgery (VS), but training in CEA is often withheld, because an inferior outcome is feared. Yet, VS training guidelines require minimum caseload experience as the primary operator and/or first assistant for training recognition.

From February 2002 to April 2011 nine VS trainees performed 816 CEAs either as primary surgeon (n = 353, 43 %) or as first assistant (n = 463, 57 %). A total of 244 months of VS training was evaluated. The average number of CEAs was 1.8 as primary operator and 3.9 as first assistant per month. There was no significant difference in the incidence of perioperative stroke and death between patients undergoing CEA performed by VS trainees or by senior surgeons.

A VS trainee can expect to perform an average of 50 or more CEAs as primary operator and 80 or more CEAs as first assistant during a training period of 36 months. This exceeds the numbers required by the Austrian Medical Council and the European Vascular Board. There was neither an inferior overall outcome nor a higher complication rate between patients undergoing CEA performed by trainees as primary operator or as first assistant. 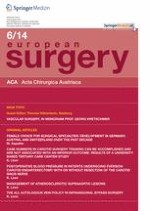 Female choice for surgical specialties: development in Germany, Austria, and Switzerland over the past decade

Can polyglactin mesh be used for prevention of seroma after mastectomy: an experimental study

The times they are a-changing’