Starting with the approval of bortezomib, a proteasome-inhibiting drug, tremendous progress has been achieved in the treatment of multiple myeloma (MM) patients during the last 15 years. Due to a plethora of novel drugs such as second generation proteasome inhibitors, immunomodulating agents and monoclonal antibodies the 5‑year survival of MM patients has been extended from 33% at the turn of the millennium to approximately 60% in younger patients (<65–70 years) who were eligible for consolidation with high-dose chemotherapy and autologous stem cell transplantation. Unfortunately, virtually all patients suffer from relapse and ultimately succumb to the disease, indicating the need for additional treatment strategies. Currently there are two promising immunologic approaches. First, bispecific antibodies called BITE (bispecific T-cell enhancer), which act as fusion proteins with two single-chain variable fragments, target antigens on malignant cells and bind the CD3 receptor and thereby recruit T‑cells to the target cells. The second strategy is chimeric antigen receptor (CAR) engineered T‑cell therapy that attacks myeloma cells by recognizing specific targets such as CD138, BCMA (B-cell maturation antigen), light-chains, SLAM-F7 (signaling lymphocytic activation molecule family member 7) or the pan B‑cell antigen CD19.
Several early phase clinical trials show encouraging results in patients who have relapsed after modern treatment including proteasome inhibitors, immunomodulating drugs and monoclonal antibodies. Here, we briefly summarize current clinical knowledge about CAR‑T cell treatment in multiple myeloma, including clinical data presented at the 61st American Society of Hematology annual meeting held in December 2019 in Orlando.
Hinweise

PF-3135 is a bispecific, humanized monoclonal antibody consisting of BCMA- and CD3-targeting arms and thus binding myeloma cells and T‑cells. There is an ongoing dose-escalation multicenter phase 1 study evaluating the efficacy of PF-3135 in RRMM patients who had received a median of 11 previous therapy lines. Interim results showed a clinical benefit rate of 41% (defined as best response ≥ stable disease) and moderate CRS events. Results of additional dose cohorts will be reported in the future [24].

Li et al. conducted the first in-human phase 1 clinical trial of a dual-target BM38 CAR containing an anti-BCMA and an anti-CD38 scFv. As of July 2019, 16 RRMM patients (≥2 previous therapy lines) received treatment with BM38. The ORR was 87.5 with 50% CR. The elimination of 5 extramedullary lesions (100% in this study) was reported as well as manageable toxicity and prolonged CR [25].

Popat et al. designed a novel CAR, using a truncated form of APRIL (a proliferation-inducing ligand) as the tumor-targeting domain which recognizes both BCMA and TACI (transmembrane activator and calcium-modulator and cyclophilin ligand interactor) on MM cells. Similar to BCMA, TACI also belongs to the TNF family and promotes B‑cell maturation. Interim phase 1 results (n = 12 patients, ≥2 previous therapy lines or dual refractory to PI and IMiD) show that the therapy was well-tolerated at doses up to 900 × 106 CAR‑T cells and achieved an ORR of 43% in the ≥225 × 106 dose cohorts [26].

While CD19 is present on normal PC, myeloma cells typically do not express CD19 [27, 28]. However, patients with monoclonal gammopathy of undetermined significance (MGUS) have a high expression of CD19 on their bone-marrow plasma cells, which indicates that CD19-expressing PC might act as myeloma stem cells [29, 30]. CTL019 (tisagenlecleucel) is a CAR‑T cell therapy approved for the treatment of advanced acute lymphoid leukemia and diffuse large B cell lymphoma [31]. An early phase clinical trial by Garfall et al. assessed the efficacy of CTL019 combined with ASCT in MM. All 10 patients who were treated with ASCT and CTL019 had previously undergone ASCT as a component of first-line therapy and had received a median of 6 therapy lines in total. In all, 8 of the 10 patients showed partial response (PR) or better 100 days after ASCT. To determine how greatly CTL019 contributed to this ORR, the authors compared the PFS following ASCT + CTL019 to the PFS following prior ASCT. They found a significantly longer PFS after ASCT + CTL019 in only 2 out of 10 subjects. Possible explanations for this low clinical benefit might be inadequate in vivo engraftment and the low dosage of CTL019 used [32].
In multiple studies, CAR‑T cells with different targets have been combined, aiming to reduce resistance due to antigen loss [33]. Recently, there have been trials investigating the efficacy of the combination BCMA-CD19 CAR‑T.
Yan et al. performed a phase 1 clinical trial on 28 RRMM patients (median of 3 previous therapy lines) who received sequential infusion of autologous CD19-CAR‑T cells and BCMA-CAR‑T cells. Among the 27 patients available to follow-up the ORR was 92.6% with 40.7% complete remissions [34].
Shi et al. compared the efficacy of combined infusion of anti-CD19 and anti-BCMA CAR‑T cells following ASCT (infused on day 14 to day 20 after transplantation) in different therapy lines. The ORR was 100% with 72% CR. ASCT and CAR‑T therapy were either administered as first-line therapy (group 1), as second line (group 2) or as salvage therapy at third line or more. They found that efficacy was higher in front line. The response (CR or better) was 78% in group 1, 100% in group 2 and 44% in group 3 [35].
Anzeige
In a study by Zhang et al., a bispecific BCMA-CD19-CAR was produced by joining BCMA and CD19 scFv with a CD8 hinge. Preclinical as well as clinical data illustrate that the bispecific CAR‑T cells are effective in the treatment of MM. In their clinical study 5 patients (median of 3 previous therapy lines) were treated and evaluated 15–59 days later: 1 patient achieved CR, 3 achieved VGPR and 1 achieved PR. The toxicity was remarkably low with three cases of only grade 1 CRS and no neurotoxicity [36].

SLAMF7, also known as CS1, belongs to the signaling lymphocyte activating-molecule-related receptor family [37]. It has been found to be expressed at high levels on PC and MM cells and at lower levels on natural killer cells, CD8+ cells, activated monocytes and dendritic cells [38].
SLAMF7 is targeted by the monoclonal antibody elotuzumab, which is approved for the treatment of MM [39].
Gogishvili et al. designed a CAR targeting SLAMF7, which is derived from the huLuc63 antibody (elotuzumab). A single administration of SLAMF7-CAR‑T cells was able to eliminate extramedullary and medullary MM manifestations in a murine xenograft model. They confirmed that the fratricide caused by SLAMF7-CAR‑T cells only affects SLAMF7+/high cells. Due to the fact that SLAMF7−/low cells of all cell subsets (natural killer cells, CD4+, CD8+, B‑cells) are spared, a number of functional lymphocytes remain [40]. A compound CAR (cCAR) T‑cell consisting of two complete and independent anti-BCMA and anti-SLAMF7 CAR receptors has shown promising in vitro and in vivo anti-myeloma activity [41]. Phase 1 clinical trials of SLAMF7 CAR‑T cells are currently ongoing.

CD138, also known as syndecan‑1, is an integral membrane proteoglycan containing both heparan sulfate and chondroitin sulfate [42]. A preclinical study investigated the capability of CD138 antibody therapy in conjunction with radioimmunotherapy in the therapy of MM in mice [43]. Moreover, CD138 CAR‑T cells both from healthy donors and MM patients showed promising anti-myeloma activity without any on-target/off-tumor cytotoxicity against normal epithelial/endothelial cells in vitro and in a mouse model [44]. CD138 CAR‑T cells administered to 5 patients (median of 8 previous therapy lines) in a phase 1 clinical trial in China led to stable disease in 4 of 5 patients and showed a manageable toxicity profile [45]. Other phase I trials using anti-CD138 CAR‑T are ongoing.

Using CAR‑T cell therapy, impressive results have been achieved in mostly heavily pretreated patients with multiple myeloma (MM). However, this treatment harbors potentially life-threatening complications and requires careful patient selection and a treatment team that is experienced in autologous and allogeneic cell therapies. Moreover, the responses using current CAR‑T strategies are frequently not durable and most of the patients suffer a relapse. The mechanisms of resistance against CAR‑T in MM are not completely understood. Basically, there are two mechanisms hampering the efficacy of CAR-T: antigen loss or antigen modification by the myeloma cells and T‑cell failure, respectively. Briefly, T‑cell failure, i.e. the nondurable T‑cell persistence, and T‑cell exhaustion, i.e. the gradual loss of T‑cell function, are important obstacles for a long-lasting antimyeloma response. Loss of target antigens on the myeloma cells can occur. A proportion of patients relapsing after CAR‑T are antigen negative and others are antigen low-expressors. Myeloma cells can downregulate target antigens and, another mechanism, T‑cells can acquire antigens from myeloma cells by trogocytosis (active transfer of antigens from MM cells to T‑cells), thereby decreasing the amount of target antigen on MM cells and, moreover, promoting the killing of such antigen-loaded T‑cells by other T‑cells, leading to T‑cell exhaustion. Moreover, it is likely that CAR‑T cells manufactured from leukapheresis obtained early during the disease course are more clinically effective than cells harvested from heavily pretreated MM patients. Current research activities regarding CAR‑T in MM include the combination with other immunological strategies such as immunomodulating drugs or checkpoint inhibitors, enhancing CAR‑T efficacy by creating CAR‑T that can recognize more than one antigen and genetic modifications to enhance their efficacy as well as the safety of this treatment. CAR‑T cell therapies are at an early stage in MM and preclinical as well as clinical research is moving rapidly forward and the gain of knowledge is growing continuously. Clinical phase 3 trials will provide more robust data on their efficacy and tolerability in myeloma patients and should provide the basis for consensus guidelines that will help to identify the optimal candidates for this promising but also potentially toxic and expensive treatment.

N. Steiner and E. Gunsilius declare that they have no competing interests.
Open Access This article is licensed under a Creative Commons Attribution 4.0 International License, which permits use, sharing, adaptation, distribution and reproduction in any medium or format, as long as you give appropriate credit to the original author(s) and the source, provide a link to the Creative Commons licence, and indicate if changes were made. The images or other third party material in this article are included in the article’s Creative Commons licence, unless indicated otherwise in a credit line to the material. If material is not included in the article’s Creative Commons licence and your intended use is not permitted by statutory regulation or exceeds the permitted use, you will need to obtain permission directly from the copyright holder. To view a copy of this licence, visit http://​creativecommons.​org/​licenses/​by/​4.​0/​. 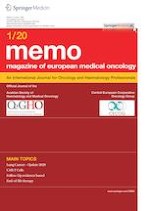