Bile leaks are common complications following liver transplantation (LT). The majority of leaks involve the anastomosis but other sites should be considered. Bile leaks are associated with biliary peritonitis and intra-abdominal abscess formation. Subvesical bile ducts formerly called ducts of Luschka are aberrant bile ducts in the gallbladder fossa. Leaks from this structure have been reported following laparoscopic cholecystectomy. Only three cases of leaks from this duct after LT have been thus far reported.

A 43-year-old man with a MELD (model for end stage liver disease) score of 29 underwent an uncomplicated LT for hepatitis C–cirrhosis and reformed alcohol abuse. Four days after discharge he developed significant abdominal pain and leukocytosis of 16,000/ml; AST was 23 IU/l and total bilirubin 2.0 mg/dl. A computed tomography scan showed massive ascites and a perihepatic hematoma. Paracentesis (5 l) revealed 10,000 nucleated cells, 98% neutrophils, and a bilirubin level of 3.4 mg/dl. Antibiotics were started; endoscopic retrograde cholangiopancreatography showed a patent anastomosis but a small leak from a side branch of the right hepatic duct. A transampullary common bile duct stent was placed. The patient developed increasing abdominal pain, ileus, and underwent laparotomy during which the perihepatic hematoma was evacuated and a bile leak from a subvesical bile duct was identified and oversewn. Cultures grew Escherichia coli and antibiotics were continued. The patient recovered from the complication and the biliary stent was removed after the leak had completely sealed. The patient is alive with a well-functioning graft 4 years after the procedure.

Leaks from subvesical bile ducts are rare complications in LT recipients, but should be recognized as a source of intra-abdominal infection. 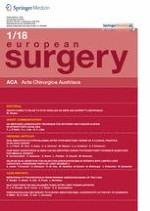 Risk reduction of hypocalcemia after thyroidectomy