Over the past 5 years several case reports and cohort studies have been published that describe a sprue-like enteropathy (SLE) with abdominal pain, chronic diarrhea and weight loss, after taking angiotensin type 1 receptor blockers (ARB). The initial case series from the Mayo Clinic, which described 22 cases of olmesartan-induced SLE, was followed by numerous case descriptions for almost all ARBs. A total of 73 case reports have been described so far that show evidence of ARB-associated enteropathy with villous atrophy and full recovery 3–12 months after discontinuation of the sartan in question. Of these, 59 cases were olmesartan-associated cases of SLE, another 14 case reports have been published for telmisartan (4), valsartan (3), losartan (2), candesartan (1) and eprosartan (1). Based on the available cohort studies, ARB-associated intestinal malabsorption occurs in 9.8–14 cases per 100,000 patients treated with ARBs, the number treated to harm is over 31,000 patient-years. Although the majority of case reports have been published with olmesartan, in the cohort studies no clear difference within the ARBs can be ruled out. The SLE is rare but must be suspected and diagnostically investigated in every patient presenting with abdominal discomfort, chronic diarrhea and weight loss who is being treated with an ARB, after other causes have been ruled out. In such cases, discontinuing the ARB leads to a full recovery.
Anzeige
Vorheriger Artikel Dimethyl fumarate is efficacious in severe plaque psoriasis
Nächster Artikel 43. Jahrestagung der Österreichischen Gesellschaft für Pneumologie. 3. Jahrestagung der Österreichischen Gesellschaft für Thoraxchirurgie 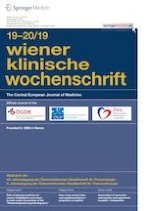