The proportion of subjects who fulfilled the minimal recommendations for health-enhancing PA was assessed with the Physical Activity Questionnaire of the European Health Interview Survey (EHIS-PAQ). The ADLs were assessed based on the Barthel index, and IADLs by the IADL scale of Lawton and Brody. Additionally, various sociodemographic and health-related factors were assessed.

The number of participants who did not fulfil the minimal requirements for aerobic or strengthening PA was very high, and these participants showed significantly more problems in ADLs and IADLs. Therefore, all future efforts should focus on increasing participation and adherence in exercise programs for older people with the intention to improve their performance status and functions in daily life.
Hinweise

Physical activity (PA) is one of the key determinants of physical, mental, and social health of children, adolescents but also of adults and older people. Health enhancing PA is associated with better health outcomes in all age groups, but especially in older people. Early development of health-relevant behavior is relevant [1]. Regular aerobic as well as muscle strengthening activities have been shown to be effective in improving performance status, functional status and quality of life [1]. Aerobic exercise has been shown to improve endurance capacity. Additionally, strength exercise in older people has been shown to increase muscular strength, physical performance, and partly muscle mass, and decrease frailty [2]. A recent correlation study of data from 11 European countries revealed a significant negative correlation between the proportion of people fulfilling the minimal aerobic physical activity recommendations (≥150 min/week) and the proportion of prefrail or frail people [3]. Exercise with the intention to improve flexibility of joints and to improve sensorimotor functions is also important for physical performance and quality of life. Regular PA including exercises targeting sensorimotor functions and balance, gait and muscle strength has been shown to prevent falls in older people living in the community [4]. Furthermore, cognitive frailty has been shown to be markedly associated with increased mortality in inactive older adults and being active has been shown to reduce the mortality risk among cognitively frail individuals. Therefore, engaging in physical activity seems to improve survival among cognitively frail older adults [5].
The Physical Activity Guidelines for Americans, 2nd edition are recommendations which provide information and guidance on the types and amounts of physical activity to improve a variety of health outcomes for multiple population groups: “Adults should do at least 150 minutes to 300 minutes a week of moderate-intensity, or 75 minutes to 150 minutes a week of vigorous-intensity aerobic physical activity, or an equivalent combination of moderate- and vigorous-intensity aerobic activity. They should also do muscle-strengthening activities on 2 or more days a week. Older adults should do multicomponent physical activity that includes balance training as well as aerobic and muscle-strengthening activities.” [6].
Anzeige
Evaluating activities of daily living (ADL) as well as instrumental activities of daily living (IADL) to describe health and function in older persons is part of the Austrian Geriatric Basic Assessment (Österreichisches Geriatrisches Basis-Assessment der ÖGGG, [7]). The ADL are often used as predictors of health and function in older persons. The European Network for Action on Ageing and Physical Activity recommends several measures such as the Barthel index to assess ADL in research and care practice in older populations [8]. The ability to maintain functional status has been shown to be an essential aspect of self-care for older adults. The IADLs are often overlooked, underassessed, and underreported, and the Lawton and Brody scale to measure IADLs has been described to be an ideal standard practice [9]. The number of people ≥65 years is increasing and the association of PA with ADL and with IADL seems to be relevant in planning future PA interventions with the goal of improving daily life in old people. It was the aim of the study to evaluate the association between fulfilling the recommendation for health-enhancing PA and impaired ADL and impaired IADL in subjects aged 65 years and older of the general community. Furthermore, it was the aim to examine if this association is mediated by various sociodemographic and clinical factors.

The database for this analysis was the Austrian Health Interview Survey (ATHIS) 2014, a cross-sectional study based on the European Health Interview Survey (EHIS, [10‐12]). In the survey, in 17 European countries, data on health status, health determinants, health care utilization, and sociodemographic and socioeconomic background data were collected.
In Austria, the survey was carried out by Statistics Austria from October 2013 to June 2015 via computer-assisted telephone interviewing (CATI). Some questions, including the questions on physical activity, were excluded from the CATI survey and participants were asked to fill in a paper questionnaire and return it via mail. For each Austrian NUTS-3 regions a sample size of 462 subjects (Viennese regions: 560 subjects) was aimed at, yielding in a gross sample size of 38,768 subjects. A total of 15,771 subjects were included in the survey (response rate: 40.7%). The response rate for the paper-based questionnaire was 93% [13]. For this analysis, weighted (according to geographic region, age, sex, family situation, migration background, and education level) data from 3398 subjects aged 65 years and older were used. In this survey, missing values were imputated [13].
To assess the proportion of subjects who fulfilled the minimal recommendations for health-enhancing PA, the Physical Activity Questionnaire of the EHIS (EHIS-PAQ) was used [14]. Here, only activities lasting for longer than 10 min were considered. For aerobic PA, the minutes spent in a typical week with cycling, doing sports, fitness, and being at least moderately physically active in the leisure time were added and dichotomized as being active at least 150 min per week or not. For muscle strengthening PA subjects were asked whether they performed muscle strengthening activities in a typical week at all, and if yes, on how many days. Again, the variable was dichotomized as doing muscle strengthening activities at least twice a week or not.
Anzeige
The following sociodemographic data were used: participants’ sex (male or female) and age in 5‑year intervals; living conditions were evaluated in two categories, living with a partner vs. living alone; education level was obtained in three levels, primary education (compulsory school), secondary education (apprenticeship school, professional/commercial school and high school) and tertiary education (university).
The following clinical parameters were used: body mass index (BMI) category, based on self-reported data for body weight and body height, and categorized as underweight (BMI <18.5 kg/m2), normal weight (BMI 18.5–24.9 kg/m2), overweight (25.0–29.9 kg/m2) and obesity (BMI ≥30 kg/m2). Furthermore, participants were asked whether they suffered from any of 17 listed chronic diseases within the last 12 months or not.
The ADLs were assessed based on the Barthel Index [15] and the following ADLs were evaluated: eating and drinking, getting up and sitting down on a chair or on a bed, dressing, using the toilet, and showering or bathing. The IADLs were assessed based on a scale proposed by Lawton and Brody [16] and the following IADLs were evaluated: preparing meals, using the telephone, shopping, organizing medication, doing light housework, doing occasionally heavy housework, and managing financial and administrative matters. For each ADL the persons could choose between the following categories: “no difficulties”, “some difficulties”, “major difficulties”, and “I am not able to do that”. For each IADL subjects could choose between the same categories and additionally the category “not applicable”. For the analysis, ADLs and IADLs were dichotomized as having no problem at all in any ADL or IADL vs. having at least some difficulties in at least one ADL or IADL. In a sensitivity analyses the ADLs and IADLs were dichotomized as having no or some difficulties in the ADLs of IADLs, vs. having at least major difficulties in at least one ADL or IADL.
For descriptive statistics, categorical variables are presented as number of subjects in each category and percentages. In stepwise binary logistic regression analyses the association between fulfilling the aerobic or muscle strengthening recommendations for PA with problems in ADLs or IADLs (dependent variables) was assessed. The first model is unadjusted, the second model was adjusted for sex, age, living condition, and education level, and the third model was additionally adjusted for BMI category and presence of chronic conditions. All parameters except age were used as categorical variables. Results are presented as odds ratios (OR) and 95% confidence intervals (95% CI), and also the estimates for the co-variables are presented. Calculations were performed using SPSS Statistics 22.

R. Crevenna and T.E. Dorner declare that they have no competing interests.

This secondary analysis of the ATHIS database was approved by the research ethics committee of the Medical University Vienna (EK# 2211/2015).
Anzeige
Open Access This article is distributed under the terms of the Creative Commons Attribution 4.0 International License (http://​creativecommons.​org/​licenses/​by/​4.​0/​), which permits unrestricted use, distribution, and reproduction in any medium, provided you give appropriate credit to the original author(s) and the source, provide a link to the Creative Commons license, and indicate if changes were made. 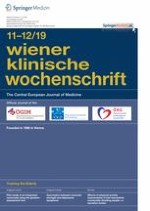