In advanced Hodgkin’s disease, a new standard of therapy was defined by the results of the HD15 trial where 6 cycles of therapy according to the BEACOPPescalated regime translated into an impressive superior longterm survival compared to more intensive alternative approaches due to reduced toxicity and less secondary malignancies. Furthermore, PET guided allocation of consolidating radiotherapy to residual masses avoided unnecessary radiation in two-thirds of patients in the HD15 trial. Excessive radiotherapy was also proofed to be detrimental in early stage disease in the framework of the NCIC CTG/ECOG HD.6 trial. Rituximab was shown to be an effective, although not curative treatment in the early “Nodular lymphocyte predominant Hodgkin’s Lymphoma” (NLPHL) subtype in several series. The remaining challenge in Hodgkin’s disease is the optimisation of therapy in elderly patients, the only patient subgroup still underperforming. In aggressive lymphomas, no definite changes of therapeutic standards could be deduced from this year’s ASH meeting while multiple new therapeutics are still in phase I and II studies. 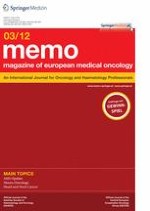 Advanced neuroimaging techniques for diagnosis and treatment evaluation in neuro-oncology