The aim of this short review is to summarize the randomized phase III trials with the highest impact on daily clinical practice relating to the field of lung cancer presented at the ASCO annual meeting 2015. With the presentation of data from the CheckMate 017 and 057 trials, comparing the anti-PD1-antibody nivolumab to standard docetaxel in the second-line treatment of patients with metastatic squamous and non-squamous non-small-cell lung cancer, immunotherapeutic strategies have finally arrived in daily routine, as the antibody treatment in these trials led to superior results concerning survival, toxicity, and response rates. However, especially in the non-squamous cohort, a heterogeneous treatment-effect of nivolumab was detected, with not all patients gaining the same benefit. To better define these subgroups by establishing robust predictive biomarkers will be of high priority in the near future. In the field of targeted therapies, the overall survival analysis from the LUX-Lung 8 trial, comparing afatinib to erlotinib in the second/third-line treatment of patients with metastatic squamous non-small-cell lung cancer, revealed a statistical significant survival-advantage for the afatinib-treatment arm. However, due to low survival-gains and added toxicity in absolute numbers, it is debatable whether this difference will change daily practice. Once again it is hoped, that the still pending biomarker analysis for this trial will be able to define a subgroup with a better risk/benefit ratio than in the overall population.
Anzeige
Vorheriger Artikel ASCO 2015: Highlights in breast cancer
Nächster Artikel Gastric and esophageal cancer: Post ASCO 2015 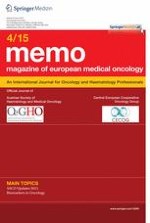 Giant Merkel cell carcinoma of the face, immediate results after radiation therapy: a case report and review of the literature