While in general, not immediately praxis changing, results of various relevant clinical trials were presented at the 2014 ASCO Annual Meeting. Indeed, the ALTTO study provided first (albeit negative) data on the activity of dual Her2 inhibition with trastuzumab and lapatinib (either sequentially or concomitantly) in the adjuvant setting, while a combined analysis of the SOFT and TEXT studies suggested, for the first time, that a combination of ovarian function suppression (OFS) plus exemestane might be superior to OFS plus tamoxifen in premenopausal early breast cancer patients. Results of the POEMS trial investigating the role of the gonadotropin-releasing hormone-analog goserelin in the prevention of chemotherapy-induced amenorrhea led to lengthy debates, as the trial reported a survival benefit in hormone-receptor-negative breast cancer patients receiving goserelin. A subgroup analysis of German Breast Group trial GeparSixto as well as several other phase II trials again emphasized the role of carboplatin in neoadjuvant therapy of triple-negative breast cancer patients. These and other studies will be reviewed within this article. 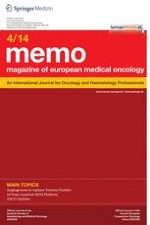 Is there a role for angiogenesis inhibition in prostate cancer?

International MDS Working Groups: a model of success to improve diagnosis and treatment in rare diseases: 10-year jubilee of the Austrian MDS platform